Panhandle is the county seat of Carson County, Texas, United States. The population of the town was 2,452 at the 2010 census. Panhandle is part of the Amarillo, Texas Metropolitan Statistical Area. 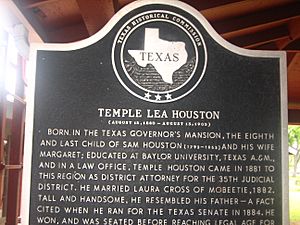 Panhandle derives its name from its central location in the Texas Panhandle. Originally named "Carson City", it was later changed to "Panhandle City".

In 1887, Panhandle obtained a post office, and in 1888 the town was planned as the terminus of the Panhandle and Santa Fe Railway. At that time the town was surrounded by several large cattle ranches. The community soon acquired a bank, a mercantile store, a wagonyard, a school, a newspaper, and three saloons.

In 1888, Carson County was organized, and Panhandle became the county seat. J. C. Paul, an early settler of Carson County, described the Plains accordingly: "It was a beautiful smooth prairie as far as the eye could see, not a tree, not even a shrub knee high, to hide a jackrabbit, for miles in every direction. No fences, no roads, no houses, only a handful of people around Panhandle, the only settlement then in all that Plains country." The cattlemen were reconciled to the arrival of farmers because they produced needed forage crops, such as hay, and introduced more families with eligible young women for the cowboy bachelors of the cattle kingdom.

Temple Lea Houston, the eighth and last child of politician Sam Houston, built a home near Panhandle. In 1881, Houston was named district attorney for the 35th Judicial District, and was elected to the Texas Senate in 1884, two years before he met the minimum age requirement of 26. Houston was known for favoring legislation popular with frontiersmen.

Panhandle was scandalized in 1897 after George E. Morrison, a preacher at the Methodist Episcopal Church, poisoned his wife Minnie with a strychnine-laced apple so that he could marry his mistress Miss Annie Whittlesey of Topeka, Kansas. Morrison was sentenced to die in the gallows at Vernon in Wilbarger County, Texas, his last words being: "Jesus, Lover of My Soul".

In 1909, Panhandle voted to incorporate with a mayor-council government.

The population grew in the 1920s when Panhandle became the center of a natural gas field.

A new county courthouse was completed in 1950.

Panhandle continued to thrive in the 1980s as a regional marketing and shipping center for cattle, wheat, and petroleum products.

The Carson County Square House Museum is located inside the oldest house in Panhandle, and is listed on the National Register of Historic Places. 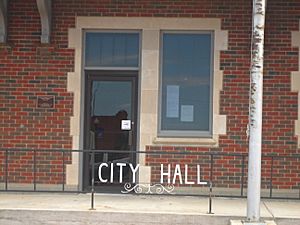 Panhandle City Hall is located in the old Atchison, Topeka and Santa Fe Railway Depot, listed on the National Register of Historic Places.

There were 945 households out of which 38.2% had children under the age of 18 living with them, 64.0% were married couples living together, 9.2% had a female householder with no husband present, and 23.9% were non-families. 22.4% of all households were made up of individuals and 12.5% had someone living alone who was 65 years of age or older. The average household size was 2.63 and the average family size was 3.10.

Panhandle is located slightly south of the center of Carson County. U.S. Route 60 passes through the town, leading northeast 27 miles (43 km) to Pampa and southwest the same distance to Amarillo. Texas State Highway 207 crosses US 60 in Panhandle and passes through the center of town; it leads north 23 miles (37 km) to Borger and south 9 miles (14 km) to Interstate 40 at Conway.

According to the United States Census Bureau, Panhandle has a total area of 2.1 square miles (5.5 km2), all of it land.

According to the Köppen Climate Classification system, Panhandle has a semi-arid climate, abbreviated "BSk" on climate maps. 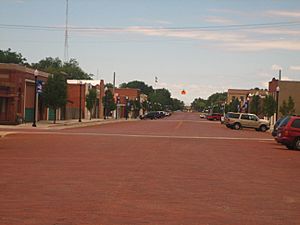 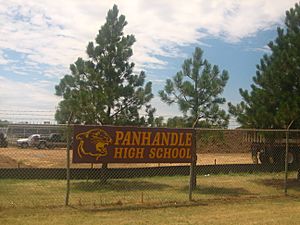 All content from Kiddle encyclopedia articles (including the article images and facts) can be freely used under Attribution-ShareAlike license, unless stated otherwise. Cite this article:
Panhandle, Texas Facts for Kids. Kiddle Encyclopedia.