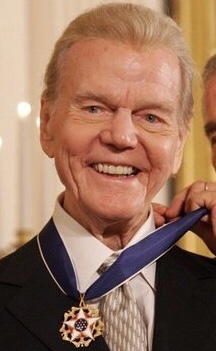 Paul Harvey Aurandt (born September 4, 1918; died February 28, 2009) was an American radio host. He was best known for his short radio program called "The Rest of the Story" that was broadcast on many radio stations in the United States. He worked in the radio industry from 1933 to 2009. He also had news programs two times a day, in which he would comment on the headlines and tell some odd news stories.

Harvey died on February 28, 2009 at a hospital in Phoenix, Arizona. His son, Paul Harvey Jr., said, "millions have lost a friend".

All content from Kiddle encyclopedia articles (including the article images and facts) can be freely used under Attribution-ShareAlike license, unless stated otherwise. Cite this article:
Paul Harvey Facts for Kids. Kiddle Encyclopedia.