Paul the Octopus facts for kids

Paul the Octopus (said to be hatched January 2008 at Oberhausen, Germany– 26 October 2010) was an octopus living in a tank at a Sea Life Centre in Oberhausen, Germany. Paul became famous around the world for correctly "choosing" the winner of Germany's seven matches at the 2010 World Cup, as well as the final.

During the divinations, Paul was shown two boxes with a mussel inside them, for food. Each box had, on the outside, a flag of a football team. Paul would eat the mussel from the box with the flag of the winning team. He did this correctly in four of Germany's six Euro 2008 matches, and in all seven of their matches in the 2010 World Cup. He correctly chose a win for Spain against the Netherlands in the World Cup final. His predictions were 100% (8/8) right for the 2010 World Cup and 86% (12/14) correct overall. Paul was retired after the 2010 FIFA World Cup. 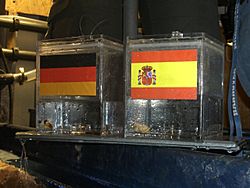 The two plastic boxes given to Paul.

It was at first said that Paul's career as an oracle began during the UEFA Euro 2008 tournament. In the lead-up to Germany's international football matches, Paul (or a similar octopus) was presented with two clear plastic boxes, each containing food: a mussel or an oyster. Each container was marked with the flag of a team, one the flag of Germany, and the other the flag of Germany's opponent. The box which Paul opened first (and ate the contents of) was judged to be the predicted winner of the game.

Some people had doubt about the octopus' abilities.

On October 26 2010, Paul died of natural causes after being inactive for the last few days.

All content from Kiddle encyclopedia articles (including the article images and facts) can be freely used under Attribution-ShareAlike license, unless stated otherwise. Cite this article:
Paul the Octopus Facts for Kids. Kiddle Encyclopedia.