Paw Paw is a village in Lee County, Illinois, United States. As of the 2010 census, the village was home to 870 people, up from 852 at the 2000 census. It was settled in the mid 19th century and by 1878 the village had a railroad connection. Paw Paw is home to a house which is listed on the U.S. National Register of Historic Places and was the recipient of a 2005 federal grant to construct a water tower. 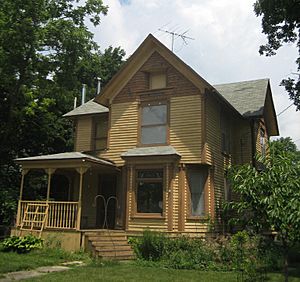 The Stephen Wright House is listed on the U.S. National Register of Historic Places.

In 1829, [there appears to be something missing here as the sentence later refers to a trail that is not previously mentioned] present-day Chicago Road was part of the Frink and Walker stagecoach line from Galena, Illinois to Chicago, though the Potawatomi Indians were the first to use the trail. The tribe didn't turn over the area to the U.S. government until 1833. Frink and Walker also held the mail contract for the area's settlers. The route became popular and garnered a mention in the work of writer Margaret Fuller.

Paw Paw's first permanent resident was David A. Town in 1834, a native of Vermont, Town settled on the south east side of a 2,000-acre (8 km2) wooded grove. The first cabin was built the next spring by Edward Butterfield on the site of present-day Paw Paw. This first house also held the village's first store and would eventually become the first structure in town to burn. During its earliest days the town was sectioned off into East, West and South Paw Paw, all of which became known as simply Paw Paw. In 1837, the village got its first postmaster, William Rodgers. Before Rodgers the nearest post office was 20 miles away in Somonauk. In 1839, a new road was constructed which allowed mail to be carried from Paw Paw to Princeton. The first stage coach station (known as a "Tavern") was built along Chicago Road and operated by Isaac Balding. Balding operated the station until the railroad came to town several years later.

Though settlement in present-day Paw Paw began during the 1830s, by 1847 there were probably no more than 50 people in the village. The name Paw Paw was derived from a nearby grove of Pawpaw trees on the edge of a 2,000-acre (8 km2) forest. American general Winfield Scott is credited with being the first person of European ancestry to discover the area. The area that Paw Paw is located in was home to more than one stand of Paw Paw trees, thus more than one settlement took the name Paw Paw. To avoid confusion the townspeople renamed the village Wyoming Township. The new name came from the Wyoming Valley in Pennsylvania, where many of Paw Paw's earliest settlers originated. The Wyoming Valley was the scene of a massacre during the American Revolution in which over 300 American settlers were killed by Native Americans allied with the British. Many of Paw Paw's early settlers shared surnames with those who are listed as having been involved in the fighting and massacre.

In 1850, Wyoming Township experienced a growth spurt despite being passed over for the coveted railroad link, by this time there were several businesses and a school. By 1878, the village finally got a railroad connection, was home to two newspapers, three churches and was christened, officially, as Paw Paw. The village was officially established in 1882 and is celebrating its 125th anniversary in 2007. 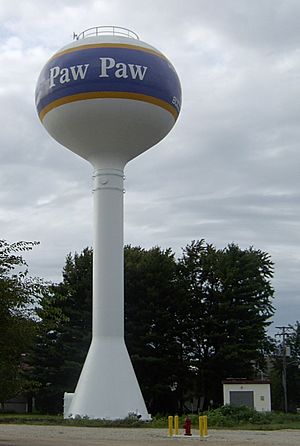 In 2005, the village received some U.S. federal government attention. On May 22 of that year, a local Queen Anne style house, the Stephen Wright House was listed on the U.S. National Register of Historic Places, it is the only property with that designation in Paw Paw. The same year the village was the recipient of an US$192,000 United States Environmental Protection Agency earmark to construct an elevated water tower.

There were 342 households out of which 31.3% had children under the age of 18 living with them, 54.1% were married couples living together, 7.9% had a woman householder with no husband present, and 33.3% were non-families. 30.4% of all households were made up of individuals and 15.5% had someone living alone who was 65 years of age or older. The average household size was 2.49 and the average family size was 3.09.

All content from Kiddle encyclopedia articles (including the article images and facts) can be freely used under Attribution-ShareAlike license, unless stated otherwise. Cite this article:
Paw Paw, Illinois Facts for Kids. Kiddle Encyclopedia.