Lee County is a county located in the U.S. state of Illinois. According to the 2010 census, it has a population of 36,031. Its county seat is Dixon.

Lee County was formed in 1839 out of Ogle County. The County is named in honor of Lighthorse Harry Lee, officer in the Revolutionary War, or Richard Henry Lee, member of the Continental Congress. The Declaration of Independence was adopted pursuant to the Lee Resolution. President Ronald Reagan lived in Dixon as a boy and attended Dixon High School. 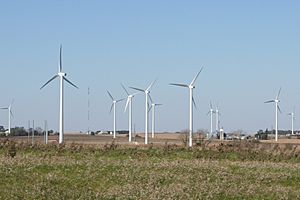 All content from Kiddle encyclopedia articles (including the article images and facts) can be freely used under Attribution-ShareAlike license, unless stated otherwise. Cite this article:
Lee County, Illinois Facts for Kids. Kiddle Encyclopedia.