Pawnee (Pawnee: Paári, Iowa-Oto: Páñi Chína) is a city and county seat of Pawnee County, Oklahoma, United States. The town is northeast of Stillwater at the junction of U.S. Route 64 and State Highway 18.

The Pawnee Agency and Pawnee Boarding School were established after the Pawnee tribe came to this area in 1875. The Pawnee Agency was designated as a post office on May 4, 1876. The area was opened to non-Indian settlers on September 16, 1893, during the Cherokee Outlet Opening. Townsite Number Thirteen (later Pawnee) had been designated as the temporary county seat. The post office was redesignated from Pawnee Agency to Pawnee on October 26, 1893. The town incorporated on April 16, 1894. On September 9, 1895, the townspeople dedicated a stone county courthouse.

The Eastern Oklahoma Railway, which later became part of the Atchison, Topeka and Santa Fe Railway, built a line through Pawnee between 1900 and 1902. In 1902, the Arkansas Valley and Western Railway (later the St. Louis and San Francisco Railway) also built a line through the city. The railroads enabled Pawnee to develop as an agricultural trade center. The population was 1,943 at statehood in 1907.

Pawnee continued to develop during the Great Depression, largely because of Federal works projects. A hospital to care for the Ponca, Pawnee, Kaw, Otoe, and Tonkawa people opened January 15, 1931. A new school building at the Osage Agency opened in 1932. The federal government built a reservoir named Pawnee Lake in 1932. A new county courthouse was also built in 1932.

There were 878 households, out of which 33.3% had children under the age of 18 living with them, 45.7% were married couples living together, 17.2% had a female householder with no husband present, and 33.8% were non-families. 32.0% of all households were made up of individuals, and 16.5% had someone living alone who was 65 years of age or older. The average household size was 2.44 and the average family size was 3.08.

A 5.8-magnitude earthquake struck near Pawnee on September 3, 2016, causing cracks and minor damage to buildings. It was the strongest recorded earthquake in state history, exceeding the 5.7 magnitude 2011 earthquake near Prague, Oklahoma. 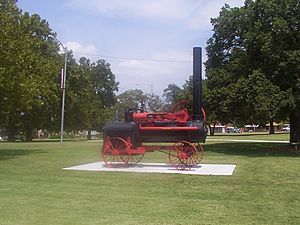 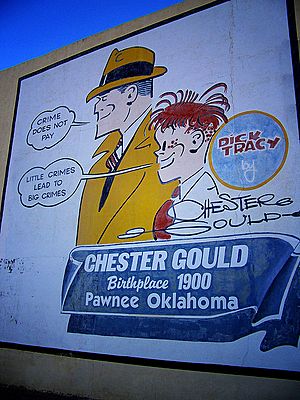 All content from Kiddle encyclopedia articles (including the article images and facts) can be freely used under Attribution-ShareAlike license, unless stated otherwise. Cite this article:
Pawnee, Oklahoma Facts for Kids. Kiddle Encyclopedia.