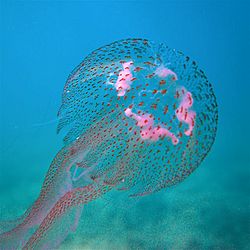 Pelagia noctiluca medusa near Sicily in the western Mediterranean Sea.

Pelagia noctiluca is a jellyfish. In Latin, Pelagia means "of the sea", nocti stands for night and luca means light thus Pelagia noctiluca can be described as a marine organism with the ability to glow in the dark.

This species is commonly known as the mauve stinger. It occurs in warm and temperate waters of the world's oceans, including the Mediterranean Sea, Red Sea and Atlantic Ocean. It is also found in the Pacific Ocean, with sightings in warm waters off Hawaii, southern California and Mexico.

It is an offshore species, although sometimes it is washed near the coastlines and may be stranded in great numbers on beaches. The color varies. As well as pink or mauve, it is sometimes shades of golden yellow to tan.

As its name implies P. noctiluca has the ability to bioluminesce, or produce light. Light is given off in the form of flashes when the medusa is stimulated by the turbulence of a ship’s motion or by waves. This flashing is short, and gradually fades.

All content from Kiddle encyclopedia articles (including the article images and facts) can be freely used under Attribution-ShareAlike license, unless stated otherwise. Cite this article:
Pelagia noctiluca Facts for Kids. Kiddle Encyclopedia.