The Penn Club of New York (usually referred to as The Penn Club) is an American private, social club located in the Midtown Manhattan neighborhood of New York City. Its membership is restricted to University of Pennsylvania alumni, students, faculty, and family members thereof, with affiliate and reciprocal membership to select institutions.

Originally occupied by the Yale Club of New York City, the 14-story clubhouse is on the National Register of Historic Places. For numerous consecutive terms, The Penn Club won the Platinum Club of America award, placing it in the top 3% among 6,000 clubs in the U.S. for perceived excellence, and ranked #14 best city club in the U.S., and #2 city club in New York City.

In November 1886, the first local group of University of Pennsylvania alumni outside of Philadelphia was formed in New York over dinner at Delmonico's Restaurant. At the alumni group's annual banquet at The Waldorf-Astoria Hotel in January 1900, they presented a plan to secure "a convenient suite of rooms in the middle of the city, adjacent to a cafe."

On October 6, 1900, the University of Pennsylvania's Club of New York opened in four ground-floor rooms in the Royalton Hotel, just 200 feet (61 m) west of today's clubhouse. The Penn Club soon had more than 150 members at a time when only 400 alumni lived in the New York area, and received its charter from the New York Legislature in 1901.

In 1905, the Club moved to "new and commodious quarters" in the Hotel Stanley at 124 West 47th Street, where it remained until 1910. Between 1911 and 1922, however, the Club did away with a clubhouse, instead focusing on their annual banquet.

In 1922, after a three-year search, the club's directors leased two townhouses on East 50th Street, next to what today is the New York Palace Hotel. Throughout the 1920s, the Penn Club on East 50th Street was active and successful. Its dining and guest rooms were regularly filled and its dinners and programs were highly attended. The Great Depression, though, quickly hit the Club hard, and it vacated its townhouses in 1935.

Thereafter, it shared space in the Cornell Club on East 38th Street, moved to two other clubs, and finally settled in the Phi Gamma Delta Club on West 56th Street, where it remained until 1961, when it moved to the Biltmore Hotel. The Club stayed in the Biltmore Hotel until the hotel was gutted and made an office tower in 1981 by Paul Milstein. 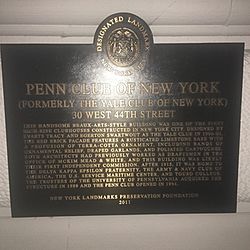 In 1989, the university bought the current 14-story building for $15 million. After raising a separate $25 million (including $150,000+ donations each from Estee Lauder heirs Leonard Lauder and Ronald Lauder, as well as Saul Steinberg, Michael Milken, and Ronald Perelman) and two years of renovation, the Penn Club moved to its current location on West 44th Street between Fifth Avenue and Sixth Avenue, opening doors in 1994.

With more than 5,000 members around the world, The Penn Club is controlled by its members and managed by staff, although the University of Pennsylvania owns the clubhouse building and leases it to the club, a 501(c)7 not-for-profit entity. The university's development and alumni relations department maintains a regional office in the clubhouse.

All members enjoy full use of the clubhouse facilities and its services. The high-rise, 14-story clubhouse includes two restaurants and bars: the double-story, Main Dining Room, which requires a jacket for men and can also be rented for events on weekends, and the Grill Room, which has a sushi chef. Its Benjamin Franklin Living Room (named after the university's founder) features a fireplace, piano, paintings of Penn leaders such as Benjamin Franklin and President Amy Gutmann, and 24/7 library for members to checkout books, and the business center has workspaces and conference rooms. In addition to five floors of 39 guestrooms, its Palestra Fitness Center features state-of-the-art equipment, a spa and massages, personal training coaches, and 13th floor terrace.

Members may also use the squash courts at the Yale Club of New York City, and have access to more than 150 reciprocal private clubs worldwide, including yacht clubs, country clubs, and golf clubs.

Membership also includes access to a members-only Penn Club website and app, and "Societies" or committees to help members network.

All content from Kiddle encyclopedia articles (including the article images and facts) can be freely used under Attribution-ShareAlike license, unless stated otherwise. Cite this article:
Penn Club of New York Facts for Kids. Kiddle Encyclopedia.