The New York Yacht Club (NYYC) is a private social club and yacht club based in New York City and Newport, Rhode Island. It was founded in 1844 by nine prominent sportsmen. The members have contributed to the sport of yachting and yacht design. As of 2001, the organization was reported to have about 3,000 members. Membership in the club is by invitation only. Its officers include a commodore, vice-commodore, rear-commodore, secretary and treasurer.

The club is headquartered at the New York Yacht Club Building in New York City. The America's Cup trophy was won by members in 1851 and held by the NYYC until 1983. The NYYC successfully defended the trophy twenty-four times in a row before being defeated by the Royal Perth Yacht Club, represented by the yacht Australia II. The NYYC's reign was the longest winning streak as measured by years in the history of all sports.

The NYYC entered 2021 and 2024 America's Cup competition under the syndicate name American Magic. 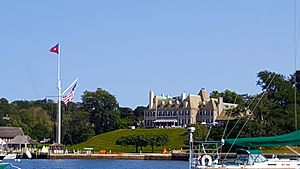 In 1845, the club's first clubhouse was established—a modest, Gothic-revival building in Hoboken, New Jersey, designed by architect Alexander Jackson Davis, on land donated by Commodore John Cox Stevens. After outgrowing its cramped quarters, the club moved to the McFarlane–Bredt House in Staten Island, then to Madison Avenue in Manhattan. The Hoboken clubhouse itself was physically relocated to Glen Cove, New York, then to Mystic, Connecticut.

Its primary clubhouse is the New York Yacht Club Building, a six-storied Beaux-Arts landmark with a nautical-themed limestone facade, at 37 West 44th Street in Midtown Manhattan. Opened in 1901, the clubhouse was designed by Warren and Wetmore (1898), who later helped design Grand Central Terminal. The centerpiece of the clubhouse is the "Model Room", which contains a notable collection of full and half hull models including a scale model history of all New York Yacht Club America's Cup challenges. It was designated a National Historic Landmark in 1987.

In addition to its Manhattan headquarters, located inland, the club maintains "Harbour Court", a clubhouse opened in 1988 on the water in Newport. 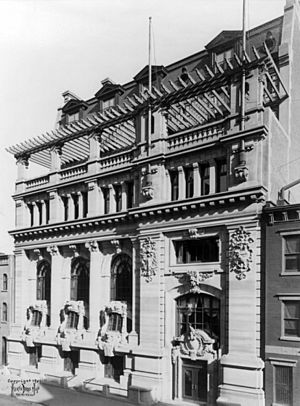 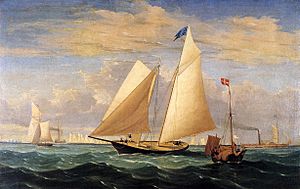 The New York Yacht Club was founded on July 30, 1844, by nine gentlemen. John Cox Stevens, the leader of this group, and a prominent citizen of New York with a passion for sports, was elected commodore. John Clarkson Jay of Rye, one of the nine founders, was a grandson of Founding Father John Jay and served as the first Secretary of the board. George L. Schuyler and Hamilton Wilkes were also NYYC founders who, together with Stevens and two others, created the syndicate that built and raced the great schooner-yacht, America. Wilkes served as the club's first vice-commodore. Schuyler played a key role in the founding of the America's Cup regatta, and served as its unofficial consultant until his death in 1890.

In 1845, the club's burgee was designed. The waters off Newport have been a key sailing venue for the NYYC since the beginning of its history. Indeed, the day the club was founded in 1844, its members resolved to sail from the Battery to Newport. Two days later, they did, with several stops on the way, and trials of speed.

During the first decades of the club's history, racing for prize money was the objective among most members. In 1851, a syndicate of NYYC enthusiasts built and raced America, capturing the "One Hundred Sovereign Cup" at the annual regatta of the Royal Yacht Squadron. On July 8, 1857, the coveted trophy was donated to the NYYC, to serve as a challenge cup for sportsmanlike competition between nations. The "America's Cup Race", named for its first winner, played a central role in the history of the club until this day.

In 1865, the Club was incorporated, adopting the Latin motto: "Nos agimur tumidis velis" -- "We go with swelling sails" (adapted from the verse of the famous Roman poet Horace, "Non agimur tumidis uelis", "We do not go with swelling sails", in Epistles, 2, 2, 201). During this time, membership transitioned from the "old guard" to a new generation of yachtsmen, who built large schooner yachts captained by professionals. Marking this evolution was the 1866 resignation of Commodore Edwin Augustus Stevens, brother of founder John Cox Stevens and member of the America syndicate. 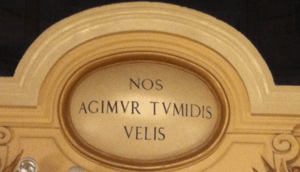 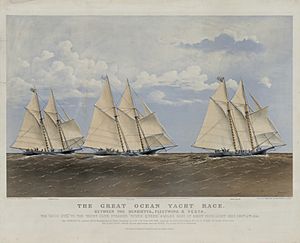 The Great Ocean Yacht Race Between Henrietta, Fleetwing & Vesta, by Currier & Ives in 1867

The year 1866 is remembered in club annals for the legendary "Transatlantic Race". In December, the NYYC schooners Henrietta, Fleetwing, and Vesta raced from Sandy Hook to The Needles, Isle of Wight for a $90,000 winner-take-all prize. The Henrietta, owned by 21-year-old James Gordon Bennett Jr., and skippered by Captain Samuel S. Samuels, won the race in 13 days, 21 hours and 55 minutes. Bennett would be elected commodore in 1871.

On August 8, 1870, the schooner Magic represented the New York Yacht Club in the international 1870 America's Cup competition in the New York Harbor and was won by Franklin Osgood's American yacht Magic. She beat 17 competitors, including the English yacht Cambria and the yachts Dauntless, Idler, Fleetwing, Phantom, America and others.

In 1876, the Mohawk, a large centerboard schooner, capsized due to its sheets being "made fast" (fastened securely) when a freak squall struck. Vice-Commodore William T. Garner, his wife and crew died in the accident. It is believed that this tragedy led to the extinction of the great centerboard schooner yachts. The Mohawk was later sold to the U.S. Navy and recommissioned as the USS Eagre.

By 1894, the New York Yacht Club had a number of Clubhouses: Station 1 in Bay Ridge; 2 in New York NY; 3 in Whitestone NY; 4 in New London, Connecticut; 5 in Shelter Island, New York; 6 in Newport RI; 7 in Vineyard Haven and at Rendezvous Glen Cove. In 1868, the club bought a big mansion used as Station 2 at Rosebank, Staten Island. This building still stands and is known as the McFarlane–Bredt House.

In 1895, Richard H. Barker composed 'The yacht club march: march and two-step: for piano' in honor of the New York Yacht Club.

Racing and the America's Cup

Following the disastrous Bay of Quinte America's Cup challenge in 1881, the Club's committee voted a new rule to govern its races:

The America's Cup challenges of 1885, 1886 and 1887 used this rule with an 85 ft (25.91 m) waterline length limit. In 1887, the NYYC adopted the Seawanhaka Corinthian Yacht Club's rating rule, which handicapped length comparatively less. Then, in 1903, the NYYC changed its rating system to the "Herreshoff Rule", devised by the yacht designer, Nathanael Herreshoff. Later renamed the "Universal Rule", it would be adopted by the majority of leading American yacht clubs. The rule governed yacht design for almost forty years.

The America's Cup was held for 132 years, from 1851 until Australia II defeated Dennis Conner's Liberty off Newport, Rhode Island in 1983. This record remains the longest winning streak in sports history.

The NYYC entered 2021 America's Cup represented by the American Magic team, led by Terry Hutchinson and Bella Mente Quantum Racing Association. In May 2018, it was announced that Dean Barker will helm the boat. "American Magic" references the first Cup winner, the yacht America, and the first defender, the yacht Magic.

All content from Kiddle encyclopedia articles (including the article images and facts) can be freely used under Attribution-ShareAlike license, unless stated otherwise. Cite this article:
New York Yacht Club Facts for Kids. Kiddle Encyclopedia.