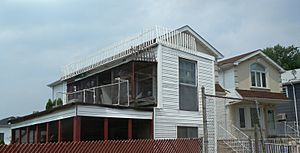 Coop for racing pigeons in Rosebank 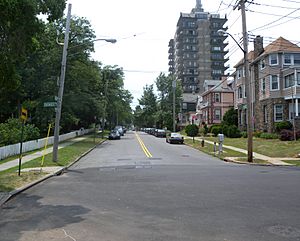 Homes and apartment buildings on Hylan Boulevard in Rosebank

Rosebank is a neighborhood in the northeastern part of Staten Island, one of the five boroughs of New York City. It is bordered by Clifton to the north, Arrochar to the south, and the Upper New York Bay to the east.

Originally called Peterstown, then called Clifton, Village of Edgewater, the name "Rosebank" appears to have been first used to denote the neighborhood around 1880. Before 1880, the area was the "Newport RI" of the USA. The area was home to great estates, some of the richest families in the country had mansions along the shore and inland. The New York Yacht Club summer house was (still stands) next to the Alice Austen House. The Vanderbilts, Aspinwalls and Townsends built and attended St Johns Church. The first baptism was Cornelius Vanderbilt II, whose father donated Vanderbilt University. The big farms and estates were divided up into small parcels and soon after 1880 Italian immigrants began settling there, and their descendants have continued as its predominant ethnic group, exemplified by the location of the Garibaldi Memorial in the community. In recent years the town has experienced an influx of other ethnic groups, including Eastern Europeans, various Hispanic nationalities as well as Asians, particularly from the Philippines.

The age, density and architectural style of Rosebank's housing stock resembles that found in most of the island's North Shore neighborhoods; however, demographically Rosebank has more in common with such East Shore communities as New Dorp. As a result, there is considerable disagreement as into which region of the island Rosebank should be classified.

The neighborhood once played host to a federal quarantine station for incoming immigrants (closed 1971), and was the home of noted photographer Alice Austen, one of Staten Island's most recognizable personalities of the past. The Garibaldi-Meucci Museum is named for a longtime resident, Antonio Meucci, who has some claim to having been an inventor of a working telephone. However, impoverished, he was unable to obtain a patent or to market it. When Giuseppe Garibaldi visited the United States while in exile from Italy, he stayed for a time at the home of Meucci. This home is now a museum named for the two men.

In addition to the Garibaldi-Meucci Museum, the Elizabeth Alice Austen House, McFarlane-Bredt House, and Our Lady of Mount Carmel Grotto are listed on the National Register of Historic Places.

After the elimination of the Bachmann's Brewery station, Rosebank was the first stop on the now-defunct South Beach Branch of the Staten Island Railway after its separation from the main line at the Clifton station immediately to the north. Service on this branch was halted in 1953. The station was located near Clifton Avenue and Tilson Place. Hylan Boulevard, Staten Island's and New York City's longest commercial roadway, begins in Rosebank on its way to Tottenville, about 14 miles (22.5 km) away

Rosebank is served by the S52 and S78 local buses on Tompkins Avenue, and the S51/81 buses on Bay Street. It is also served by the X1, X2, X3, and X9 express buses from Manhattan on Narrows Road North.

All content from Kiddle encyclopedia articles (including the article images and facts) can be freely used under Attribution-ShareAlike license, unless stated otherwise. Cite this article:
Rosebank, Staten Island Facts for Kids. Kiddle Encyclopedia.