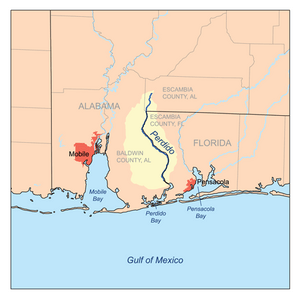 A map showing Perdido Bay and the Perdido River.

Perdido Bay is a bay at the mouth of and draining the Perdido River, a designated Outstanding Florida Waters river, in Baldwin County, Alabama and Escambia County, Florida, United States. It is essentially a coastal lagoon enclosed by barrier islands, with an inlet, Perdido Pass.

Ono Island and the mouth of the bay are within Alabama territory. The Florida border crosses Florida Point and the barrier islands just east of Alabama Point and Perdido Pass, where the bay empties into the Gulf of Mexico. Perdido Pass also provides maritime access from Perdido Bay to the Intracoastal Waterway and the Gulf. 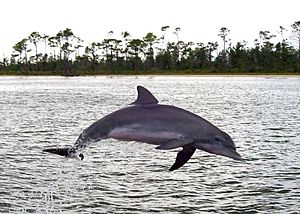 A dolphin at Perdido Bay, near Orange Beach, Alabama

Following the Deepwater Horizon oil spill (called the "Gulf oil spill"), the entrance to Perdido Pass was closed, with a barrier system in June 2010, to control tidal flow of oil entering from the Gulf of Mexico. The daily high tide was causing oil-contaminated water to enter Perdido Bay. The barrier system is designed to allow boats to travel through Perdido Pass, during the outflowing tide, but to close during the incoming tide and collect oil deposits in a retention area on the eastern edge of the pass.

All content from Kiddle encyclopedia articles (including the article images and facts) can be freely used under Attribution-ShareAlike license, unless stated otherwise. Cite this article:
Perdido Bay Facts for Kids. Kiddle Encyclopedia.