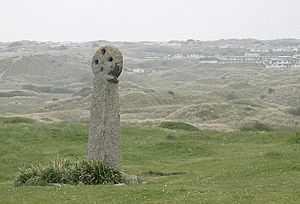 Perranzabuloe is a coastal civil parish and a hamlet in Cornwall, United Kingdom. The hamlet (containing the parish church) is just over a mile (2 km) south of the main settlement of the parish, Perranporth and seven miles (11 km) south-southwest of Newquay. The parish population was 5,382 in the 2001 census.

The name of the parish comes from the medieval Latin Perranus in Sabulo meaning Piran in the sand. Piran (the patron saint of Cornwall) was a Christian evangelist who founded a church in the seventh century near the coast north of Perranporth. The ruins of this church were rediscovered in the 20th century. The medieval parish church of Perranzabuloe was over a long period completely lost in sand dunes. A new church had to be built further away from the coast.

All content from Kiddle encyclopedia articles (including the article images and facts) can be freely used under Attribution-ShareAlike license, unless stated otherwise. Cite this article:
Perranzabuloe Facts for Kids. Kiddle Encyclopedia.