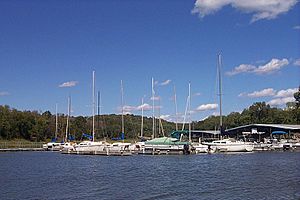 Sailboats and other watercraft in the Perry Lake marina.

Perry Lake is a US Army Corps of Engineers operated reservoir in northeast Kansas. Its primary purposes are flood control, water reserve for nearby areas and regional recreation. The lake is approximately 11,150 acres (45 km²) in size, with over 160 miles (260 km) of shoreline. Perry Lake's full multi-purpose pool elevation is 891.5 feet (271.7 m) above sea level. Perry Lake is located about 40 miles (64 km) west of Kansas City, just northwest of Lawrence, Kansas. Its close proximity to Kansas City, Lawrence, and the state capitol, Topeka, make it a very popular destination, with the nickname "Paradise on the Plains".

The dam was constructed on the Delaware River to help control flooding downstream in both the Delaware and Kansas rivers. Completed in 1966, the rolled earth fill dam is 7,750 feet (2,360 m) long and rises to 95 feet (29 m) in height above the stream bed, abating flooding for over 1,117 square miles (2,890 km2) of northeast Kansas. In 1968 the U.S. Army Corps of Engineers reached a long term land usage lease with the Kansas Parks and Resources Department, allowing for the development of Perry State Park.

Several settlements lie on or near the reservoir. The largest is its namesake, the community of Perry, located on the Delaware River a few miles south of the dam. Ozawkie lies on the western shore at the lake's northern end. To the east and south of Ozawkie, a number of unincorporated communities lie on both sides of the lake. In order from north to south, these are: Lake Shore, Lakewood Hills, and Lakeside Village on the eastern shore and Indian Ridge, West Shore, Hilldale, Hilldale South, Lake Ridge, and Hickory Acres on the western shore. Thompsonville lies immediately south of the lake at the west end of the dam.

The streambed underlying the reservoir has an elevation of 826 feet (252 m). Since the reservoir's initial flooding, sedimentation has gradually accumulated on the reservoir bottom thus raising its elevation.

All content from Kiddle encyclopedia articles (including the article images and facts) can be freely used under Attribution-ShareAlike license, unless stated otherwise. Cite this article:
Perry Lake (Kansas) Facts for Kids. Kiddle Encyclopedia.