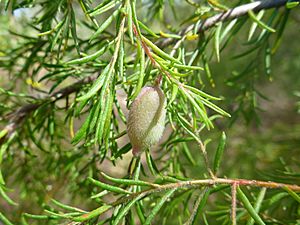 Persoonia hirsuta, commonly known as the hairy geebung or hairy persoonia, is a plant in the family Proteaceae and is endemic to eastern New South Wales. It is a hairy, spreading to low-lying shrub with linear, lance-shaped or spatula-shaped leaves and yellow or orange flowers arranged singly or in groups of up to ten on a rachis up to 20 mm (0.79 in) long.

Persoonia hirsuta is a spreading to low-lying shrub that typically grows to a height of 0.3–1.5 mm (0.012–0.059 in) and has hairy branchlets leaves, flowers and fruit. The leaves are spatula-shaped to elliptic or linear to narrow oblong leaves, 5–14 mm (0.20–0.55 in) long and 0.7–5 mm (0.028–0.197 in) wide with the edges curved downwards or rolled under. The flowers are borne singly or in groups of up to ten on a rachis up to 20 mm (0.79 in) long that continues to grow into a leafy shoot after flowering. The tepals are yellow or orange, about 10 mm (0.39 in) long. Flowering mostly occurs from November to January and the fruit is a fleshy green to cream-coloured drupe with red streaks.

Collected by John White in the vicinity of Port Jackson (Sydney) in 1794, Persoonia hirsuta was first formally described by Christiaan Hendrik Persoon in his 1805 work Synopsis Plantarum.

In 1991, Peter Weston and Lawrie Johnson described two subspecies and the names are accepted by the Australian Plant Census:

Hairy geebung usually grows in open woodland and heath on sandstone soils. Subspecies evoluta is sporadically distributed on the Central Coast and Central Tablelands in the Putty, Glen Davis and Hill Top districts, mainly at altitudes between 350 and 600 m (1,150 and 1,970 ft). Subspecies hirsuta is found from Gosford to the Royal National Park, mainly within 20 km (12 mi) of the coast and at altitudes lower than 300 m (980 ft).

The two subspecies intergrade with each other from the lower Blue Mountains to within 15 km (9.3 mi) of the coast. Subspecies evoluta also hybridises with P. mollis subsp. nectens. The fruit are adapted to be eaten by vertebrates, such as kangaroos, possums, and currawongs and other large birds.

Persoonia hirsuta is listed nationally as endangered under the Environment Protection and Biodiversity Conservation Act 1999 and in New South Wales under the Biodiversity Conservation Act 2016. The species occurs in fragmented small populations throughout its range and is threatened by urban development, clearing or degradation of bushland and too frequent bushfires and burning of bush. The European honeybee has been implicated in the decline of this and other species as it is suspected of being a poor pollinator of persoonia flowers.

All content from Kiddle encyclopedia articles (including the article images and facts) can be freely used under Attribution-ShareAlike license, unless stated otherwise. Cite this article:
Persoonia hirsuta Facts for Kids. Kiddle Encyclopedia.