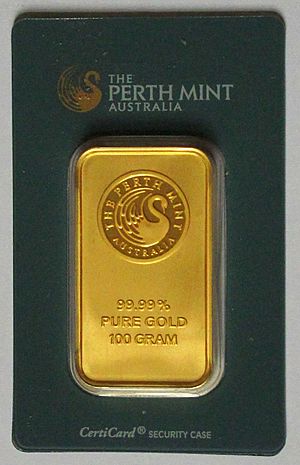 Gold ingot from the Perth Mint

The Perth Mint is Australia's official bullion mint and wholly owned by the Government of Western Australia. Established on 20 June 1899, two years before Australia's Federation in 1901, The Perth Mint was the last of three Australian colonial branches of the United Kingdom's Royal Mint (after the now-defunct Sydney Mint and Melbourne Mint) intended to refine gold from the gold rushes and to mint gold sovereigns and half-sovereigns for the British Empire. Along with the Royal Australian Mint, which produces coins of the Australian dollar for circulation, The Perth Mint is the older of the two mints issuing coins that are legal tender in Australia.

After the foundation stone was laid in 1896 by Sir John Forrest, the Mint opened on 20 June 1899. At that time, Western Australia's population was growing rapidly (23,000 in 1869 and 180,000 in 1900) due largely to the discovery of rich gold deposits in Coolgardie, Kalgoorlie and Murchison areas of the colony.

As there was very little money available in Perth for which miners could exchange gold to pay for goods, the Diggers who flocked to the then colony of Western Australia in huge numbers from other parts of Australia and from around the world, deposited their raw gold at The Perth Mint where it was minted into gold coins.

Although Federation occurred in 1901, the Mint remained under the jurisdiction of Great Britain until 1 July 1970, when it became a statutory authority of the Government of Western Australia.

From 1899 to 1931, The Perth Mint struck more than 106 million gold sovereigns, and nearly 735,000 half-sovereigns (intermittently between 1900 and 1920), for use as currency in Australia and throughout the British Empire. The Mint stopped making gold sovereigns when Britain abandoned the gold standard in 1931. Nevertheless, the refinery remained busy as staff turned their skills to making fine gold bullion bars. But it was not long before the Mint was involved again in the production of coins. During World War II, The Perth Mint began minting the Australian coinage from base metals. Up until the end of 1983, The Perth Mint also manufactured much of Australia's lower-denomination coin currency.

The Perth Mint achieved "arguably the purest of all gold" in 1957 when the mint produced a 13-troy-ounce (400 g) proof plate of six nines - 999.999 parts of gold per thousand. The Royal Mint was so impressed that it ordered some of the gold as the benchmark for its own standards.

The Mint's new direction was formalised in 1987 with the creation of Gold Corporation by a State Act of Parliament. Under a unique agreement with the Commonwealth of Australia's Department of the Treasury, the Mint's new operator was empowered to mint and market gold, silver and platinum Australian legal tender coinage to investors and collectors worldwide. Prime Minister Bob Hawke launched the Australian Nugget Gold Coins Series in 1987. The first day's trading yielded sales of 155,000 ounces of gold worth A$103 million, well above the sales target of 130,000 ounces to the end of June.

Up to 2000, the Mint's refined gold output totalled 4,500 tonnes, representing 3.25% of the total weight of gold produced by humankind. This is about the current holdings of gold bullion in the United States Bullion Depository at Fort Knox.

In 2003, The Perth Mint officially opened an 8,400 square metre state-of-the-art manufacturing facility next door to its original limestone building.

In October 2011, The Perth Mint created the world's largest, heaviest and most valuable gold coin, breaking the record previously held by the Royal Canadian Mint. The coin is approximately 80 centimetres (31 in) in diameter and 12 centimetres (4.7 in) thick, and made of 1,012 kilograms (2,231 lb) of 99.99% pure gold. It features, on the obverse side, the effigy of Elizabeth II, and a red kangaroo on the reverse side. It is legal tender in Australia with face value A$1 million, but at the time of minting it was valued at A$53.5 million.

As of November 2019, the Mint refines approximately 79 percent of the Australasian market's gold production and 30 percent of silver at a separate secured facility outside the city center. It mints coins and bars from both Australian gold and metal sourced from other countries, representing 10 percent of the global production. It sold about A$18.9 billion in pure gold, silver, and platinum bullion bars and coins in 2018.

GoldPass is an app powered by InfiniGold technology which allows investors to instantly and securely buy, sell and transfer physical gold via digital certificates. Each certificate is 100% backed by physical gold held at The Perth Mint and guaranteed by the Government of Western Australia. In October 2019, precious metals digitalisation company InfiniGold announced it would issue the Perth Mint Gold Token (PMGT) on the Ethereum public blockchain. Each digital token is backed 1:1 by GoldPass certificates held by InfiniGold and maintained directly with The Perth Mint.

A collaboration known as the Gold Industry Group began a Heart of Gold Discovery Trail in Perth in October 2018. The project included The Perth Mint as a partner.

In June 2020, an investigation by the Australian Financial Review found that Perth Mint had purchased annually from a convicted killer in Papua New Guinea. The Western Australian corruption watchdog launched an investigation. On the 27th of July it was reported that HSBC and JP Morgan stopped buying gold from Perth Mint, citing potential damage to their reputation. On 10 August an LBMA probe into the Perth Mint found no serious examples of misconduct.

In October 2020, Perth Mint found itself caught up in a global tax evasion probe into a Puerto Rican bank. The Perth mint partnered with Euro Pacific to allow the bank's customers to buy gold.

International enforcement sources confirmed in October 2020 that Euro Pacific was the target of Operation Atlantis, an international tax probe by the “J5”, a task force made up of the tax chiefs of Australia, the US, UK, the Netherlands, and Canada that was set up after the Panama Papers leak. The Perth mint partnered with Euro Pacific to allow the bank's customers to buy gold. The Perth Mint was also probed by the ATO in January, sources with knowledge of the raids say.

On October 20th an article from the Australian Financial Review reported that the Perth Mint allowed clients of a tax haven bank, which was being investigated for its links with global organized crime syndicates, to purchase more than $100 million of gold without conducting the identity checks required to prevent money laundering.

In July 2020 an article in the Australian Financial Review revealed that the Perth Mint had signed the Bank of Cyprus as a customer and granted approved dealer status to Euro Pacific Bank, from the Virgin Islands, and Swiss Private bank, BFI Consulting. All three institutions provide offshore banking services to clients who may be seeking to avoid tax or disguise the true ownership of their assets.

In September 2018 the Perth Mint defended its decision not to make disclosure announcements to the ASX and New York Stock Exchange on the grounds the breach did not relate to its ASX-listed PMGold or NYSE listed AAAU investment products.

In June 2020 the Perth Mint said it would stop processing metal from artisanal and small-scale miners after allegations that it took gold dug in Papua New Guinea using child labour and toxic mercury.

All content from Kiddle encyclopedia articles (including the article images and facts) can be freely used under Attribution-ShareAlike license, unless stated otherwise. Cite this article:
Perth Mint Facts for Kids. Kiddle Encyclopedia.