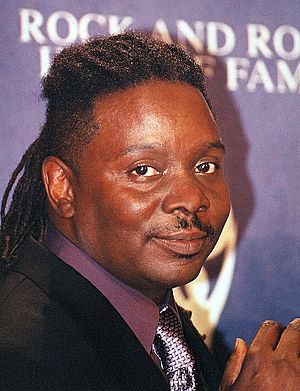 Philip James Bailey (born May 8, 1951) is an American singer-songwriter, percussionist and actor. He was one of the lead singers (along with group founder Maurice White) of the band Earth, Wind & Fire. He has won seven Grammy Awards. He has released ten albums, including Chinese Wall. He also performed the duet "Easy Lover" with Phil Collins.

Bailey was born in Denver, Colorado. He has been married twice and has six children.

All content from Kiddle encyclopedia articles (including the article images and facts) can be freely used under Attribution-ShareAlike license, unless stated otherwise. Cite this article:
Philip Bailey Facts for Kids. Kiddle Encyclopedia.