Phineas and Ferb Get Busted! facts for kids

"Phineas and Ferb Get Busted!", broadcast outside the United States and Canada as "At Last", is the 45th broadcast episode of the animated television series Phineas and Ferb. The episode aired in the United States on February 16, 2009 on Disney XD and on March 13, 2009 on Disney Channel. The episode follows Phineas and Ferb finally being caught by Phineas' mother (and Ferb's stepmother) and sent to reform school, where a harsh and cruel sergeant attempts to destroy their imagination by sitting them down to a commercial about good boys that mind-controlled them. Candace goes to save them after she sees a news report about their horrible condition.

Phineas and Ferb rebuild their mother Linda's station wagon as a flying car and build a giant tower. Candace shows Linda, who is furious, and Phineas confesses that they've been doing similar things all summer. The tower collapses, destroying part of the house. The parents send the boys to the "Smile Away Reformatory School", unaware that it is a prison where kids are brainwashed to remove their creativity.

Candace enjoys fun activities with her friends, but after a few days is bored and haunted by the sad consequences of busting Phineas and Ferb, realizing that she loves her brothers for their genius skills. She and Jeremy take the flying car to save her brothers, disguised as reporter Morty Williams and his cameraman. She secretly asks Phineas and Ferb to escape with them.

At the flying car they see Linda and Lawrence, but the sergeant arrives to put Candace and Jeremy in the school as well. Dr. Doofenshmirtz and Perry the Platypus knock the sergeant off the cliff to his death. The parents turn into marionettes controlled by a giant Baljeet, who turns into one as well, controlled by a talking zebra, and Jeremy proposes to Candace.

It was all Candace's dream, which she tells her family at breakfast, even revealing Perry's secret identity. Major Monogram bursts in with an army of OWCA (Organization Without a Cool Acronym) agents to relocate Perry and mind-erase the Fletchers and Flynns.

A whimpering Perry wakes up in Phineas's bed, the events of the entire episode having all been just a bad dream. Phineas reassures him, telling him to go back to sleep, which they both do. 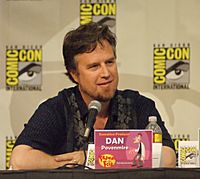 "Phineas and Ferb Get Busted" was written by Bobby Gaylor and Martin Olson as a story, but the storyboards were adapted and constructed by Jon Colton Barry and Piero Piluso. Robert F. Hughes and Zac Moncrief as well are apple credited for additionally writing for the episode. Dan Povenmire, the show's co-creator and executive producer, directed the episode.

The episode is titled "At Last" in several countries, such as the United Kingdom. Latin America as well labels the episode name in its end credits for the episode, despite entitling it "Al Fin;" however, "Al Fin" literally translates to "At Last."

Geraldo Rivera guest starred as the voice of investigative talk show host Morty Williams. Clancy Brown, known for his work in The Shawshank Redemption, and SpongeBob SquarePants provided the voice of the drill sergeant. "Phineas and Ferb Get Busted" was originally broadcast in America as the premiere of season two on Presidents' Day, February 16, 2009 on Disney XD, at 4:30 PM Eastern/Pacific Time. It was followed by first season reruns aired in a marathon.

Also, this episode will be aired on March 13, 2009 at 8:30PM Eastern/Pacific Time on Disney Channel in the United States. It is episode 16 on Disney plus

All content from Kiddle encyclopedia articles (including the article images and facts) can be freely used under Attribution-ShareAlike license, unless stated otherwise. Cite this article:
Phineas and Ferb Get Busted! Facts for Kids. Kiddle Encyclopedia.