Sangster also grew in popularity for starring in critically acclaimed cult films such as Death of a Superhero (2011), Bright Star (2009) and as Paul McCartney in Nowhere Boy (2009). He made a cameo appearance in Star Wars: The Force Awakens (2015), and took the roles of Whitey Winn in the Netflix miniseries Godless (2017) and of John Tracy in Thunderbirds Are Go (2015–present).

Thomas Sangster was born in Southwark, a district in London, on 16 May 1990 to Mark Sangster and Tasha Bertram. Sangster's father's family is from Banchory, Scotland. His great-grandfather, Anthony Bertram, was a novelist, and a maternal ancestor was politician and colonial administrator Sir Evan Nepean, through whom he has Cornish and Welsh ancestry. He has one sister, Ava Sangster. Sangster plays bass and guitar, and he learned to play left-handed guitar to portray the left-handed Paul McCartney in the feature film Nowhere Boy. He also learned how to play the drums in the feature film Love Actually (2003). 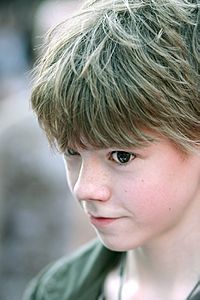 In 2001, Sangster's first acting role was in a BBC television film, Station Jim. He subsequently appeared in a few more television films, including the lead roles in Bobbie's Girl, The Miracle of the Cards (based on the story of Craig Shergold) and Stig of the Dump. He won the "Golden Nymph" award at the 43rd Annual Monte Carlo Television Festival for his role in the miniseries Entrusted. Sangster's first major theatrical film was Love Actually (2003), in which he played Sam. He was nominated for a Golden Satellite Award and a Young Artist Award for his role in the film.

Sangster next appeared in a television adaptation of the novel Feather Boy and played a younger version of James Franco's Tristan in the film version of Tristan & Isolde. Among other things, Sangster takes part in a (child's) sword fight in the film. Sangster next starred in the commercially successful film Nanny McPhee (2005) as the eldest of seven children. 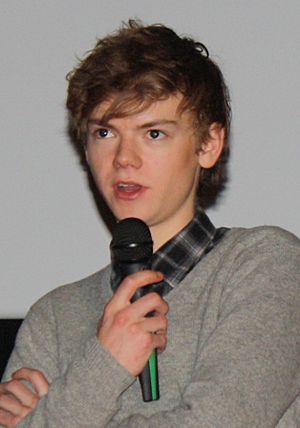 Sangster promoting Death of a Superhero in 2011

In 2007, he appeared in a two-part story (Human Nature and The Family of Blood) in Doctor Who as schoolboy Timothy "Tim" Latimer, and guest-starred in the Big Finish Doctor Who audio dramas The Mind's Eye and The Bride of Peladon. His voice lowered during filming of the Doctor Who episodes. He also starred in the film adaptation of Valerio Massimo Manfredi's historical novel The Last Legion, released in 2007. That same year he voiced the character of Ferb Fletcher in the Disney Channel animated series Phineas and Ferb. He appeared in the 2008 miniseries Pinocchio, filmed in Italy, as Lampwick.

In March 2008, it was announced that Sangster would star in Steven Spielberg's CGI motion capture film The Adventures of Tintin as the title character of Hergé's comic books. Sangster left the project after scheduling difficulties when filming was delayed in October 2008 and the role was given to Jamie Bell.

Also in 2008, Sangster had a role in director Jane Campion's film Bright Star, a love story about John Keats and his lover Fanny Brawne. He also starred as Paul McCartney in Nowhere Boy, a film directed by award-winning artist Sam Taylor-Wood, about the teenage years of John Lennon.

Sangster appeared as Casey in the film Some Dogs Bite about a boy who wants to keep his family together. Casey takes his baby brother out of foster care and, with the help of his older brother, goes in search of their father. Sangster appeared in the Irish film Death of a Superhero, based on the novel by Anthony McCarten.

Additionally, Sangster plays Liam in the 2011 film The Last Furlong. In April 2011, he made a guest appearance as Adam Douglas in an episode of British detective drama Lewis. In 2012, he starred in The Baytown Outlaws and in Ella Jones's short film, The Ugly Duckling, the third installment of the Tales trilogy of reworked fairy tales from More Films. From 2013 to 2014, he played the role of Jojen Reed in the HBO series Game of Thrones. In 2015, he began providing the voice of John Tracy in ITV's remake of Gerry Anderson's puppet series Thunderbirds Are Go (2015–present).

On 24 May 2017, a 15-minute sequel to Love Actually was released with Sangster as part of the cast. It was shown on the BBC as part of Comic Relief's Red Nose Day and titled Red Nose Day Actually and brought back a large number of scenes from the first film.

Sangster established Brodie Films in 2006 with his mother, Tasha Bertram, "to create opportunities in the film industry for new British talent; innovative writers, actors and directors." The company was dissolved in May 2013.

Sangster plays bass guitar, and in January 2010 joined the band Winnet, in which his mother provides vocals.

All content from Kiddle encyclopedia articles (including the article images and facts) can be freely used under Attribution-ShareAlike license, unless stated otherwise. Cite this article:
Thomas Brodie-Sangster Facts for Kids. Kiddle Encyclopedia.