Picnic Bay refers to both a bay on the south-east corner of Magnetic Island (offshore from Townsville in Queensland, Australia) and the island's main town. At the 2006 census, Picnic Bay had a population of 360.

Until recently, the bay was the landing site for ferry services from the mainland, but ferries now arrive at a new terminal at nearby Nelly Bay. The town of Picnic Bay features an open-air shopping complex, The Picnic Bay Mall, and a patrolled beach along the waterfront. The town also hosts the Magnetic Island Golf Course and the Magnetic Island Police Station. Off the coast the wreck of the George Rennie is visible at low tide.

The town is serviced by Magnetic Island Bus Service, which runs regular services to coincide with Ferry arrivals and departures at the Nelly Bay Ferry Terminal. The foreshore bus stop, which is located at the base of the Picnic Bay Jetty is the terminus for bus services which run from Horseshoe Bay, via Arcadia and Nelly Bay. Picnic Bay is also serviced by Magnetic Island Taxi Service and a number of vehicle hire companies operate in Picnic Bay and Nelly Bay which allow tourists to hire vehicles for use on the Island's road network. Use of hire vehicles on West Point Road is discouraged by vehicle hire companies due to a large portion of the road being unsealed and impassible in most vehicles.

The first known settlement of Picnic Bay was by Harry Butler and his family who established a small dairy, orchard and mixed farm in Picnic Bay in 1877 when Magnetic Island was declared a quarantine station. The family experimented in the cultivation of pineapples in the bay and as part of a tourism venture built a guest house establishing an intermittent ferry service from Townsville. The Butler family cared for the sick who were quarantined on the island prior to the construction of the permanent quarantine station at West Point.

Having purchased the Butler family's huts in Picnic Bay in 1898 Robert Hayles, an entrepreneur formerly a pastoral worker in western Queensland, erected a two storey hotel, dance hall and a temporary jetty at the western end of the bay to establish a larger tourist operation in the bay.

In 1900 Hayles applied to build a permanent wooden jetty (6 feet wide and 100 feet long). The jetty was approved by the Queensland Marine Department in March 1900 and the jetty hurriedly constructed. In 1903 Cyclone Leonta struck Townsville and Magnetic Island and caused serious damage to Hayles' new jetty. Hayles carried out extensive repairs on the structure but by 1910 the structure was in poor condition. In 1909 Hayles was granted a creek-front location in Ross Creek on the mainland and was able to establish a consistent passenger service to Magnetic Island. With Hayles establishing a regular ferry service to Magnetic Island the permanent population of the Island began to grow.

In June 1910 Hayles was granted another permit to construct a jetty in Picnic Bay. Although it is unclear whether the second jetty was constructed in addition to the one constructed in 1900 or to replace it, a letter dated February 1917 from the Townsville Harbour Board to the Marine Department acknowledges the presence of two privately owned jetties in the bay. In 1911, Hayles' hotel was destroyed by a fire and a new hotel began construction. At around the same time, Hayles further expanded his business on magnetic island launching further tourism ventures in Nelly Bay, Horseshoe Bay and Arcadia. In June 1920 the Townsville Harbour Board were vested control of the jetty at Picnic Bay, as well as those established in other bays.

With the outbreak of war in 1939 Hayles' facilities in Picnic Bay were commandeered by Australian defense forces as a rest and recreation camp for service personnel and were not returned until the end of World War II in 1945. Hayles undertook a large upgrade of the facilities on Magnetic Island during the period following the war including upgrades of roads, buildings and the dredging of a channel for vessels entering Picnic Bay. 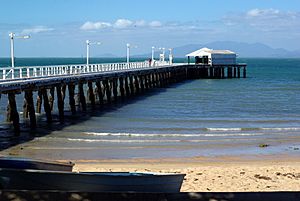 The Picnic Bay jetty, constructed in 1959 and used as a ferry terminal until the mid-2000s.

In 1957 a permit was issued for a construction of a new jetty in picnic bay by the Department of Harbours and Marine. Successfully completed in October 1959, the Picnic Bay Jetty was completed by John Holland using £43,000 financed by The Commonwealth Aid Marine Works Trust Fund . It was leased from 1960 to 1981 to Hayles Magnetic Island Pty Ltd. (established by Robert Hayles in 1922) who were also responsible for maintenance of the structure during the lease period.

On Christmas Eve 1971 Magnetic Island and Townsville were struck by Cyclone Althea, While the Picnic Bay jetty remained structurally sound despite receiving some damage, serious damage was inflicted upon most buildings in the bay and foliage stripped off trees.

In 1977 a shelter was erected for passengers waiting for ferries at the end of the Picnic Bay jetty by the Townsville City Council. In 1985 the Townsville Harbour board gained approval to build a larger shelter shed on the Jetty. Following the completion of Magnetic Harbour in 2003 ferry operations to the Picnic Bay jetty ceased and a large number of local retailers moved their businesses to newer premises in Nelly Bay. As such a large number of premises in the Picnic Bay Mall became empty. Shortly after this a development company attained a large amount of land (including that currently used by the Picnic Bay Hotel) and began work on a new multistory apartment complex with retail premises on the ground floor. Unfortunately due to the death of the developer and a series of legal issues work has halted on the project.

Picnic Bay has a number of heritage-listed sites, including:

All content from Kiddle encyclopedia articles (including the article images and facts) can be freely used under Attribution-ShareAlike license, unless stated otherwise. Cite this article:
Picnic Bay, Queensland Facts for Kids. Kiddle Encyclopedia.