Nelly Bay is a town on Magnetic Island and a suburb of the City of Townsville, Queensland, Australia. In the 2016 census, Nelly Bay had a population of 1,196 people. A tourism hub on the island, it is especially significant as the site of the ferry terminal, which links it to Townsville.

Robert Hayles, a local entrepreneur, started tourist ventures in the bay around 1911 and in 1917 correspondence between the Townsville Harbour Board and the Queensland Marine Department notes the existence of a jetty in the bay. During the Second World War an anti-aircraft battery was built on the foreshore of the bay. While the concrete foundations of the battery still exist, they are now overgrown, and surrounded by a housing estate. 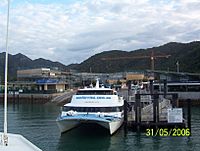 Nelly Bay Ferry Terminal (on right) with construction at Magnetic Harbour (to see, click on the blank and then click on the image after the file opened)

Nelly Bay is also home to Magnetic Island's largest infrastructure development, Magnetic Harbour, also known as Nelly Bay Harbour. The development consists of a new ferry and barge terminal, with an emergency services helipad, retail services, a marina and multi-storey residential dwellings. A frequent ferry service is operated by Sunferries, with its passenger ferry to the Townsville breakwater, and Fantasea with its vehicular barge to South Townsville.

In February 1984, Bob Katter Jr., the then new Minister for Northern Development, announced the $100 million development of a harbour and marina precinct in Nelly Bay proposed by Geoff Orpin, a former Maroochy Shire Councillor who moved to Magnetic Island in 1980. At the time, the project was to be called Magnetic Keys, and Katter insisted all environmental concerns would be addressed with construction beginning within six months. However, it was another 18 months before the developer was even able to obtain the correct permission and leases to perform feasibility and environmental impact studies in the bay.

While there was a large amount of interest in the development, the Great Barrier Reef Marine Park Authority (GBRMPA) delayed granting a permit due to the possible environmental effects of the proposed harbor development. In October 1987, they finally changed the zoning of the bay to permit the harbour development, but waited until October of the following year before issuing the necessary construction permit in an atmosphere of controversy. The permit included certain conditions the developer had to meet, including rehabilitation insurance to cover the rehabilitation of the environment should the development not proceed.

At around the same time, the Townsville City Council, originally opposed to the development, rezoned the Bright Point area for tourist usage and requested state government ministerial rezoning for the entire development. The Townsville City Council further approved the construction of a hotel and unit development on the Bright Point headland which also allowed the headland to be quarried for rubble for the harbor breakwater under the pretext of preparing the site for the development.

Major construction works started in August 1989, despite major objection from local residents and environmental groups. The following year saw a number of court cases and tribunals held in opposition to the project, but none of these halted construction. It was later alleged that the developer made an unrecorded donation to Townsville Mayor Tony Mooney's election campaign. Further improprieties were suggested between Townsville City Council employees and one of the judges overseeing a case appealing the development. It was also alleged that the developer offered a bribe to GBRMPA during its deliberations some years earlier.

In 1990, one of the main lenders for the project collapsed, followed by one of the major stakeholders in the project, Pacific Properties. However, work continued to accelerate until July 1990, when the dredge being used on the project sank, followed shortly by the collapse of the Magnetic Keys Consortium. It was then revealed that rehabilitation insurance had not been obtained by the developer, and the development was surrendered to the state government.

In 1995, a number of proposals were raised to complete the development. None proceeded. In 1998, these proposals were revised to reduce the number of lots from 88 to 40 and more than halve the occupancy from 1328 to 638. With some minor alterations, this was the proposal which was finally agreed.

In 2003, the new ferry terminal began operations. The terminal contains a small retail area and is next to bus stops and car parking. 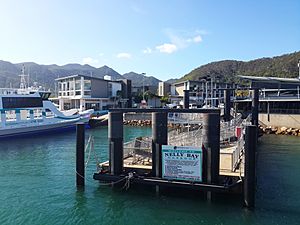 Nelly Bay is home to Magnetic Island's largest infrastructure development, Magnetic Harbour, also known as Nelly Bay Harbour. The development consists of a new ferry and barge terminal, with an emergency services helipad, retail services, a marina and multi-storey residential dwellings. A frequent ferry service is operated by Sunferries, with its passenger ferry to the Townsville breakwater, and Fantasea with its vehicular barge to South Townsville.

All content from Kiddle encyclopedia articles (including the article images and facts) can be freely used under Attribution-ShareAlike license, unless stated otherwise. Cite this article:
Nelly Bay, Queensland Facts for Kids. Kiddle Encyclopedia.