Plattsmouth is a city and county seat of Cass County, Nebraska, United States. The population was 6,502 at the 2010 census.

The Lewis and Clark Expedition passed the mouth of the Platte River, just north of what is now Main Street Plattsmouth, on July 21, 1804.

Plattsmouth first appeared in 1854 as "the Barracks", a trading post established by Sam Martin, owner of the Platteville ferry in neighboring Mills County, Iowa, ferryman Wheatley Mickelwait, and Glenwood, Iowa attorney and politician Colonel Joseph Longworthy Sharp. The community was renamed Plattsmouth for its location at the mouth of the Platte River, and was incorporated on March 15, 1855.

The organization of the city under the charter of March 1855 was effected December 29, 1856, by the election of Wheatley Mickelwait to the Mayoralty, and Enos Williams, W. M. Slaughter and Jacob Vallery, Aldermen. This Council met and proceeded to business on January 29, 1857, their first ordinance, approved by the Mayor March 2, 1857, levying a tax of one-half of 1 per cent on all taxable property within the corporate limits of the city of Plattsmouth, the amount collected to be expended in the improvement of the streets and alleys and steamboat landings at and in the city. On December 7, 1857, the Council voted each member an annual salary of $100, being something over $16 apiece for each session held during the year. This is a noticeable fact, in view of the action taken by the succeeding Council on December 30, 1858, in ordaining that the Mayor and Alderman receive for their services during that year the sum of 5 cents each, payable in city scrip; the Assessor, Recorder and Treasurer being paid $25 apiece for the same term. 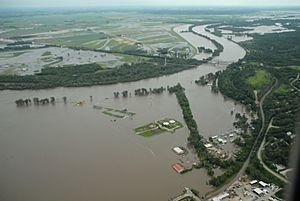 Plattsmouth bridges on June 22, 2011 during the 2011 Missouri River floods

All content from Kiddle encyclopedia articles (including the article images and facts) can be freely used under Attribution-ShareAlike license, unless stated otherwise. Cite this article:
Plattsmouth, Nebraska Facts for Kids. Kiddle Encyclopedia.