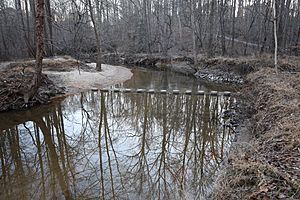 One of many crossings of the Gerry Connolly Cross County Trail over Pohick Creek in Newington, Virginia

Pohick Creek is a 14.0-mile-long (22.5 km) tributary stream of the Potomac River in Fairfax County in the U.S. state of Virginia. It takes its name from the Pohick Native American tribe once prevalent in the area.

Pohick Creek forms in the vicinity of Burke and flows southeast past the western edge of Fort Belvoir to empty into the tidal Pohick Bay, which itself empties, along with Accotink Bay, into Gunston Cove, an embayment of the tidal Potomac River. Pohick Creek is a popular stream for whitewater kayaking, rafting, and paddling, providing Class II and III rapids along a 5.5-mile (8.9 km) stretch between Hooes Road (Virginia Secondary Route 636) and the Richmond Highway (U.S. Route 1) at Lorton.

Several tributaries of the Pohick Creek are impounded by dams constructed under the Watershed Protection and Flood Prevention Act to prevent soil erosion and flooding. Originally eight dams were planned, but from 1970 to 1985, only six were actually built.

The following variant names have been listed on the Geographic Names Information System by the United States Geological Survey.

Pohick Creek forms at the confluence of Rabbit Branch and Sideburn Branch in Burke, Virginia. Pohick Creek Creek then flows southeast, forming the border between Burke and West Springfield. After crossing the Fairfax County Parkway, it enters Newington and descends into a gorge where the Gerry Connolly Cross County Trail follows the creek, crossing it eight times. It then passes into Lorton and crosses Interstate 95, the CSX RF&P Subdivision, and U.S. Route 1. It then meets the Potomac River in Pohick Bay about 0.5 miles north of Springfield Farms.

All content from Kiddle encyclopedia articles (including the article images and facts) can be freely used under Attribution-ShareAlike license, unless stated otherwise. Cite this article:
Pohick Creek Facts for Kids. Kiddle Encyclopedia.