Point Mallard Park is a park in Decatur, Alabama, United States that sits on 500 acres (2.0 km2) of the Flint Creek shoreline. The park, which is open all year, borders the Wheeler National Wildlife Refuge and is operated by the City of Decatur Parks and Recreation Board.

Point Mallard Park's J. Gilmer Blackburn Aquatic Center was developed after Gilmer Blackburn, mayor of Decatur from 1962 to 1968, saw enclosed "wave-making" swimming pools in Germany and thought one could be a tourist attraction in the United States. J. Austin Smith, an Ohio pool manufacturer, worked with the city of Decatur to design the pool. In 1967 the Point Mallard Authority was formed with the intent of creating the new park without city tax revenue. The land where the park is now located was occupied by the Tennessee Valley Authority (TVA) for industrial use. The city issued $3.8 million in bonds for the initial cost of the park, and construction began in September 1969. The park opened on August 8, 1970 with the wave pool, Olympic-sized swimming pool, and golf course. They, along with Big Surf in Tempe, Arizona claim to have built the nation's first wave pool, although Big Surf's is actually the oldest, opening in the summer of 1969. No other wave pools were constructed in the nation for another eleven years. The campground was constructed a few years later in 1972 and the open-air ice rink in 1973.

A few years after initial opening, a ten meter tall diving tower with three platforms was constructed. It is named after Olympic gold medalist Jenny Chandler, who practiced there prior to her win in the 1976 Summer Olympics diving events. The pool was also the training facility for the 1976 U.S. Olympic Diving Team, and was where Greg Louganis (who won Gold Medals in the 1984 and 1988 Summer Olympics) trained from 1976 to 1979.

President Ronald Reagan spoke at the Spirit of America Festival at Point Mallard on July 4, 1984.

In 1987, the wave pool was renamed the J. Gilmer Blackburn Aquatic Center after mayor Blackburn.

In 2013, the park finished constructing a lazy river and two new speed slides. 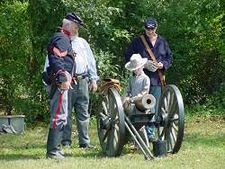 All content from Kiddle encyclopedia articles (including the article images and facts) can be freely used under Attribution-ShareAlike license, unless stated otherwise. Cite this article:
Point Mallard Park Facts for Kids. Kiddle Encyclopedia.