Ponta Grossa is a Brazilian city, in the southern region of the country, in the state of Paraná. With a population of over 300,000 inhabitants, it is the 4th most populated city of Paraná.

The city is home town of the Parque Estadual da Vila Velha ("State Park of Old Town"), a park made up of rocky formations formed over millions of years.

Other attraction of the city is the Münchenfest - A National Stout Festival with national and international concerts that lasts a whole week and occurs at late November and the beginning of December. 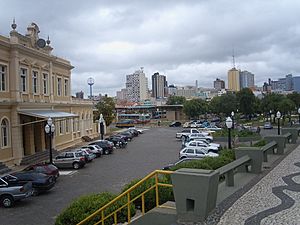 All content from Kiddle encyclopedia articles (including the article images and facts) can be freely used under Attribution-ShareAlike license, unless stated otherwise. Cite this article:
Ponta Grossa Facts for Kids. Kiddle Encyclopedia.