Port Laoise, or Portlaoise (Irish anglicised), is a town in Ireland. It is located in Co. Laois in the South Midlands in the province of Leinster. With a population of 20,145 , it is the second-most populous town in the Midlands, (with only eight fewer people than Athlone) and It is also the most populous county town in the Midlands Region, which has a total population of 282,195 at the 2011 census. The Preliminary Results for the 2016 census shows that the town's population increased by 8.4% to 21,839, which is well above the national average of 3.7%.

It was an important town in the medieval period, as the site of the Fort of Maryborough, a Fort built by English settlers in the 16th Century.

Portlaoise is fringed by the Slieve Bloom mountains to the west and north-west and the Great Heath of Maryborough to the east. It is notable for its architecture, engineering and transport connections. On the national road network, Portlaoise is located 80km (49 miles) south-west from Dublin on the N7/M7, 170km (105 miles) north-east from Cork on the M8/M7 and 113km (70 miles) east of Limerick on the M7.

It was once famous for the manufacture of iron and steel buildings, tennis balls, rubber seals and electrical cabling. Today Portlaoise is a commercial centre, with the economy dominated by the service sector, and an important retail, transport, events and conference hub. 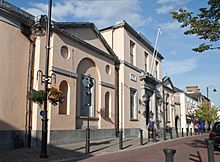 The site where the present town is situated is referred to in the Annals of the Four Masters as Port Laoighisi during the 16th century. The present town originated as a settlement around the old fort, "Fort of Leix" or "Fort Protector", the remains of which can still be seen in the town centre. Its construction began in 1548 under the supervision of the then Lord Deputy Sir Edward Bellingham in an attempt to secure English control in the county following the exile of native Celtic chieftains the previous year. The fort's location on rising ground, surrounded to the south and east by the natural defensive barricades of the River Triogue and an esker known locally as 'the Ridge', greatly added to its strategic importance.

The town proper was established by an act of Parliament during the reign of Queen Mary in 1557. Though the early fort and its surrounding settlement had been known by a number of names, such as Governor, Port Laois, Campa and Fort Protector, the new town was named Maryborough (IPA [ˈmarbrə]) and the county was named Queen's County in Mary's honour. In about 1556, Portlaoise acquired its first parish church—Old St Peter's—situated to the west of Fort Protector. Although first built as a Catholic church, thanks to Queen Mary's reestablishment of Roman Catholicism, the church was used for Protestant services after the accession to the English throne of Mary's half-sister, Elizabeth.

The area had been a focus of the rebellion of Ruairí Óg Ó Mórdha, a local chieftain who had rebelled and had lost his lands, which the Crown wanted to be settled by reliable landowners. For the next fifty or so years, the new English settlers in Maryborough fought a continual, low-scale war with the Gaelic chieftains who fought against the new settlement. The town was burnt several times by the end of the sixteenth century.

Portlaoise was granted a market in 1567, and then in 1570, a charter of Queen Elizabeth I raised the town to the rank of borough. This allowed the establishment of a Corporation of the Borough, a body which consisted of a burgomaster, two bailiffs, a town clerk, and a sergeant at arms, as well as various other officers, burgesses and freemen. Until the Act of Union took effect in 1801 and the abolition of its franchise, the town returned two members to the Irish Parliament. The Corporation itself existed until 1830.

In 1803-04, a new Church of Ireland church was built to replace the Old St Peter's and was the first building to be erected on the new Market Square. The building is attributed to architect James Gandon. Other notable buildings constructed in Portlaoise in the nineteenth century included the now-destroyed French Renaissance-style Town Hall on Market Square; the Court House on Main Street, built in 1805; the County Gaol built in 1830 to a design by William Deane Butler; and the neo-classical St. Fintan’s Asylum, built in 1832 on the Dublin Road.

In 1929, a few years after the foundation of the Irish Free State, the town was renamed Portlaoighise (later simplified to Portlaoise) and the county was renamed County Laois. A number of other towns in the Free State also reverted to their Irish (or anglicised Irish) names during this period.

Portlaoise is one of Ireland's fastest growing towns, with a 37.9% increase in population from 2006 to 2011. Non-Irish nationals accounted for 21.7 per cent of the population compared with a national average figure of 12.0 per cent. Polish (7%) were the largest group, followed by Lithuanians (2.7%). Portlaoise is known for having one of the highest percentages of black residents in the country. The former Mayor, Rotimi Adebari was the first person of African descent to become mayor in Ireland. 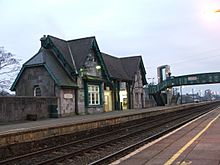 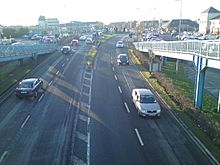 . Portlaoise is one the busiest railway stations outside of Dublin. It is the terminus of the Portlaoise Commuter Service which stops at all stations to Heuston and runs hourly off peak and every 20/30 minutes during peak times. It is the busiest county town railway station in the Midlands Region, with up to 32 trains to Dublin (10 Non-Stop) and 30 trains from Dublin (9 Non-Stop) per day.

Portlaoise’s central location within Ireland and its concentration of restaurants, pubs, bars and nightclubs around Market Square, Main Street and the Church Street area of the town centre and other nearby facilities such as Paintball, Golf, Bowling and other amenities make it a popular destination for Hens & Stag Parties and other weekend breaks. Portlaoise railway station is the closest station to Stradbally Hall where the Electric Picnic Festival is held each year.

Every year the town hosts the Old Fort Quarter Festival in June, the Halloween Howls Comedy Festival on the October bank holiday weekend and the Leaves Literature Festival in November.

Since early 2008 Portlaoise has been the Irish base of Self Help Africa, formerly Self Help Development International, the Irish development agency engaged in implementing long term rural development programmes in Sub-Sahara. Established at the time of the Ethiopian Famine of 1984, Self Help is the chosen charity of the Irish Farmers Association.

All content from Kiddle encyclopedia articles (including the article images and facts) can be freely used under Attribution-ShareAlike license, unless stated otherwise. Cite this article:
Port Laoise Facts for Kids. Kiddle Encyclopedia.