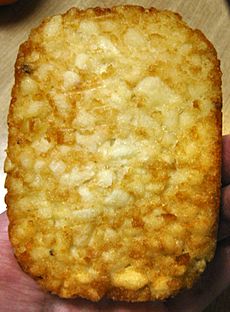 An American potato cake, also referred to as a potato patty

In parts of England and America, a potato cake is a patty of hashed potatoes, a kind of hash brown. These are available both fresh and frozen in supermarkets, and are served by many restaurants, such as fast food restaurants like McDonald's and Whataburger, often as part of the breakfast menu. The term can also refer to a sort of potato pancake.

Another variant popular in the United Kingdom is prepared from cold mashed potatoes and fresh eggs. The two ingredients are combined, then fried until crisp on the outside. 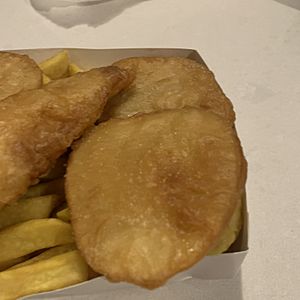 In Australia and England, potato scallops in the form of thin slices of potato, battered and deep-fried. The terminology used in Australia differs from state to state. In Victoria, Tasmania, and the Riverina and the Murray River regions of New South Wales, they are referred to as "potato cakes". In the eastern and northern regions of New South Wales, Queensland, and the ACT the term "potato scallops", or simply "scallops" (and to avoid confusion, scallops eaten as seafood may be known as "sea scallops"). In South Australia and in New Zealand, "potato fritter" is most common, while in Western Australia and Northern Territory it is a mixed bag as to which term is used.

Potato scallops are typically called "scollops" in northern and central England, and "fritters" in other areas. This variant is normally a thin slice of potato, dipped in batter and deep fried, with no additional flavouring added except salt and vinegar. This type of "potato scallop" is also found in New Zealand fish and chip shops, however there it is referred to as a potato fritter, not scallop. More commonly in New Zealand, a potato scallop is made from either mashed or grated potato and is not covered in batter or deep fried. Hash browns, which are also widely available, are distinctly different. In Scotland, what are known as potato scallop in Australia are known as potato fritters and are of the same type as the English variant.

The term may refer to a preparation of mashed potatoes baked in the form of pie or a scallop made using potatoes or potato flour.

In U.S. fairs, they are known as battered potatoes. 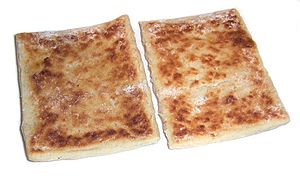 Irish potato bread is typically made from mashed potato, and either flour or baking soda, and is usually fried. This is not the same dish as boxty; boxty is made using raw potatoes, whereas potato scallop is made using cooked potatoes. In Ireland, potato bread is served in traditional breakfasts along with soda bread and toast.

Scottish tattie scones and Lancashire potato cakes are made from mashed or reconstituted potato and flour, and baked on a griddle. They are typically served fried with breakfast, or as a snack with butter or margarine, although they are often served with other toppings such as baked beans, scrambled eggs, garlic butter, or tomato ketchup.

All content from Kiddle encyclopedia articles (including the article images and facts) can be freely used under Attribution-ShareAlike license, unless stated otherwise. Cite this article:
Potato cake Facts for Kids. Kiddle Encyclopedia.