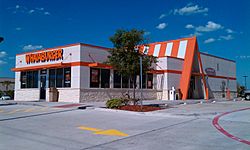 A Whataburger in Frisco, Texas

Whataburger is a fast food restaurant that specifically makes hamburgers. It was founded in 1950 in the city of Corpus Christi, Texas. The restaurant chain was completely on portable stands until the first permanent store was built in 1961. Most Whataburger locations are open for all 24 hours in the day.

All content from Kiddle encyclopedia articles (including the article images and facts) can be freely used under Attribution-ShareAlike license, unless stated otherwise. Cite this article:
Whataburger Facts for Kids. Kiddle Encyclopedia.