Powderham Castle seen from the south west, flying the heraldic flag of the Earl of Devon 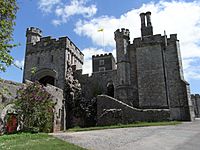 Powderham Castle, view of the Victorian entrance tower (left) and causeway from south-west

Powderham Castle, west front, viewed from under the Victorian gatehouse. The leftmost tower dates from 1390–1450 as does the main high central block, which originally housed a full-height great hall. The central entrance tower was built 1710–1727. The single-storey projecting room built between the two towers, with three tall gothic-style windows, is the Victorian Dining Hall.

Powderham Castle is a fortified manor house situated within the parish and former manor of Powderham, within the former hundred of Exminster, Devon, about 6 miles (9.7 km) south of the city of Exeter and 1⁄4 mile (0.4 km) north-east of the village of Kenton, where the main public entrance gates are located. It is a Grade I listed building. The park and gardens are Grade II* listed in the National Register of Historic Parks and Gardens.

It is situated on flat, formerly marshy ground on the west bank of the River Exe estuary where it is joined by its tributary the River Kenn. On the opposite side of the Exe is the small village of Lympstone. The castle was expanded and altered extensively in the 18th and 19th centuries, most notably by James Wyatt in the 1790s. The castle remains the seat of the Courtenay family, Earls of Devon.

The manor of Powderham is named from the ancient Dutch word polder, and means "the hamlet of the reclaimed marsh-land". 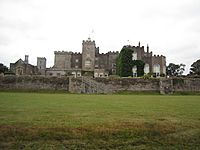 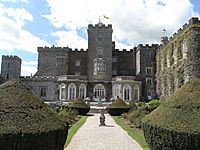 Powderham Castle, Devon, east (garden) front. The wing projecting forwards at the right contains the second library, built 1766–69. The central tower and flanking single-height bow-windows date from 1710–27. The tower in the corner-angle to the right and the main full-height range behind date from 1390–1450.

At some time after 1390 the medieval core of the present structure was built by Sir Philip Courtenay (d. 1406), the 5th or 6th son of Hugh Courtenay, 2nd Earl of Devon (d. 1377). The Earls of Devon were seated at Tiverton Castle until 1556, and their cousins of this cadet line known as "Courtenay of Powderham" continued to exist in parallel, not always on amicable terms, as prominent county gentry, arguably the leading and most prestigious gentry family of Devon, actively engaged in the local administration of Devon as JP's, sheriffs and MP's. From 1556 on the extinction of the senior line of Courtenay of Tiverton, the Courtenays of Powderham had become retrospectively, as was decided by law in 1831, de jure Earls of Devon, and became de facto Earls from 1831 when the title was confirmed to them in law. They had however shortly before obtained the right to sit in the House of Lords when created Viscounts.

The original building on the site was a fortified manor house, the appellation "castle" was added probably no earlier than the 17th century. The building has never been a true castle, that is to say with a keep and moat, although it did possess a curtain wall and yard on the east side (now the rose garden) as shown in the 1745 engraving by Buck. Leland mentioned a barbican or bulwark in this area, but these were demolished as part of the 18th-century landscaping works designed to provide an uninterrupted view from the lower rooms towards the Exe Estuary. Many castle-like elements on the west front (main entrance) were added in the 19th century. The gatehouse was built between 1845–47 to a design by Charles Fowler. The tall rectangular structure beyond with a tower to the north is essentially the original fortified manor house. The projection from the lower storey to the north in lighter stone with three Gothic-style windows is the Victorian dining hall, designed by Fowler.

Wars of the Roses

During the Wars of the Roses the enemies of the Courtenay Earls of Devon of Tiverton Castle were the Bonville family of Shute. Their distant cousin at Powderham, Sir William Courtenay (d. 1485) married Margaret Bonville, daughter of William Bonville, 1st Baron Bonville (1392–1461), which confirmed Powderham as a Bonville stronghold against the Earls of Devon. On 3 November 1455 Thomas de Courtenay, 5th Earl of Devon (1414–1458), at the head of a private army of 1,000 men, seized control of Exeter and its castle and laid siege to Powderham for two months. Lord Bonville attempted to raise the siege and approached from the east, crossing the River Exe; he was unsuccessful and was driven back by the earl's forces. On 15 December 1455 the Earl of Devon and Lord Bonville met decisively at the First Battle of Clyst Heath in Exeter, where Bonville was defeated and after which the earl sacked and pillaged Shute.

During the Civil War Powderham Castle was garrisoned by 300 Royalist soldiers under the command of Sir Hugh Meredith. In December 1645 a Parliamentarian detachment under the command of Sir Thomas Fairfax tried, without initial success, to capture it but it fell on 25 January 1646 to Col. Robert Hammond. The castle was badly damaged in the assault and remained, in places, open to the elements until the early 1700s when it was repaired by Sir William Courtenay, 2nd Baronet (d. 1735). 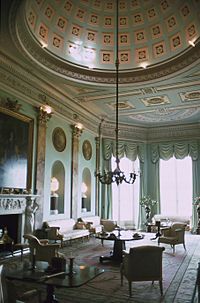 The house is centred on the 14th- and 15th-century thickly-walled double-height rectangular building formerly comprising from north to south the withdrawing room, great hall, screens passage and kitchens, which are now represented in the same orientation by the ante-room, staircase hall, marble hall and Victorian kitchen.

The marble hall is used as a sitting room which has an 18th-century fireplace. Contents of the room include a 14 feet (4.3 m) high longcase clock made about 1745 by William Stumbels of Totnes; a large 17th-century Brussels tapestry with rustic farm-yard scenery after Teniers above the fireplace; and a 1553 carved wooden over-mantel decorated with the Courtenay arms. Two portraits of the present Earl of Devon and his wife hang on the north wall above the wooden panelling.

The hall has an impressive mahogany staircase decorated with carved heraldic beasts and intricate plasterwork.

The spectacular Music Room, designed by James Wyatt in 1788 for the flamboyant 3rd Viscount of Devon, has an Axminster carpet made in about 1798 by Thomas Whitty of the original Axminster Carpets Ltd.

The house has a mixture of medieval features and fine 18th-century decoration. Upstairs the original solar has a collection of toys. There is also a collection of paintings and family portraits by many notable artists. There is a narwhal tusk, sometimes said to be a unicorn horn able to detect poison. 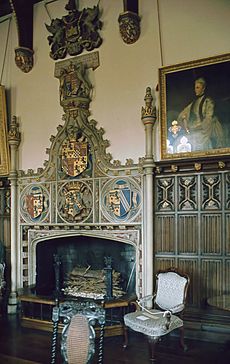 The heraldic chimneypiece (c. 1860) in the Dining Hall

William Courtenay, 11th Earl of Devon (d. 1888) installed a heraldic chimneypiece in the Dining Hall in memory of his grandfather Reginald Courtenay (1741–1803), Bishop of Exeter from 1797 to 1803, and of his parents. The Dining Hall was built by his father William Courtenay, 10th Earl of Devon (d. 1859) between 1847 and his death in 1859, and the 11th Earl completed the internal decorations in 1860, including the linen fold panelling containing several dozen ancestral heraldic shields. It is copied from the mediaeval chimneypiece in the Bishop's Palace, Exeter, installed c. 1485 by Peter Courtenay (d. 1492) Bishop of Exeter, a younger son of Sir Philip Courtenay (1404–1463) of Powderham. The armorials on the lowest row are from left to right:

A further copy of the Courtenay Exeter Bishop's Palace chimneypiece can be found, in Italian grey marble, at Kentwell Hall in Suffolk, bearing the arms of the Clopton and Logan families. 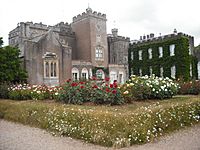 Powderham Castle and Rose Garden from the south-east, an identical view to which was engraved by Samuel Buck in 1745

Since 1745 the second library has extended the chapel wing, the two low rooms either side of the clock tower have been converted to bow-window fronts, and the castellated gatehouse tower, which might have blocked this view, has been demolished. In addition, the harbour on the River Kenn, which here flows into the River Exe, has been altered by landscaping.

Powderham Castle has been a Grade I listed building since 1952, and recognised as an internationally important structure. The staircase, hall, music room and master bedroom of the house were used as locations for the 1993 film The Remains of the Day. The house was also used as a setting for a recent film comedy, Churchill: The Hollywood Years.

The castle's licence to host wedding ceremonies was revoked with effect from 1 January 2009 after Hugh Courtenay, 18th Earl of Devon, refused a gay couple use of the building to hold their civil partnership ceremony because it did not fit with his religious beliefs. On 29 September 2009, the Earl auctioned 113 treasures from the castle, at Sotheby's in London, in order to cover debts accrued in running the 14th-century home. The sale of family silver, furniture, antiques and paintings made a total of £1,013,638. He denied that the auction was prompted by the loss of revenue from weddings. Subsequently, the Earl handed control of the estate to his son, Charles, Lord Courtenay, now the 19th Earl of Devon. The licence to host weddings, civil ceremonies and civil partnerships at the Castle has now been reinstated.

In 2017 Mary Berry visited and filmed an hour long programme as part of her 4 part series, Mary Berry's Country House Secrets, broadcast on BBC One.

Powderham Castle features as the photographic location of the rebranding of the Historic Houses Association in 2018.

In 2018 the Castle opened up new rooms, and previous private family only areas as part of two new guided tours, the first time the tours have been altered since opening in the 1950s.

Rock band Status Quo played a concert at Powderham Castle in 2003, in support of their Riffs album.

The band played there again in 2009, alongside other performers including ABC, Go West, Kid Creole and the Coconuts, Howard Jones, Nik Kershaw, Cutting Crew, Doctor and the Medics, Altered Images and Marc Almond.

All content from Kiddle encyclopedia articles (including the article images and facts) can be freely used under Attribution-ShareAlike license, unless stated otherwise. Cite this article:
Powderham Castle Facts for Kids. Kiddle Encyclopedia.