Prairie City is a city in Grant County, Oregon, United States. The population was 909 at the 2010 census. The community was incorporated by the Oregon Legislative Assembly on February 23, 1891.

Prairie City grew out of the former mining camp of Dixie, established in 1862 about 3 miles (5 km) up Dixie Creek from the John Day River. Prairie City, at the mouth of the creek, was chosen after placer mining rendered Dixie unsuitable for a townsite. The new city's post office was established in 1870 with Jules Le Bret as postmaster.

A narrow gauge line, the Sumpter Valley Railway (SVR), ran 80 miles (130 km) from Baker City west to Sumpter and on to its western terminus at Prairie City, which it reached in 1907. It carried passengers as well as freight shipped by ranchers, mining interests, and timber companies until its piecemeal abandonment in the 1930s. In the 21st century, a heritage railway operates on a segment of the original line between Sumpter and McEwen.

Prairie City is in eastern Oregon at the upper end of the John Day River valley. It is about 50 miles (80 km) southwest of Baker City by highway and 13 miles (21 km) east of John Day along U.S. Route 26 in Grant County. Strawberry Mountain in the Strawberry Mountain Wilderness of the Malheur National Forest is directly south of the city.

According to the United States Census Bureau, the city has a total area of 0.99 square miles (2.56 km2), all land.

There were 402 households of which 24.9% had children under the age of 18 living with them, 53.7% were married couples living together, 7.2% had a female householder with no husband present, 3.0% had a male householder with no wife present, and 36.1% were non-families. 32.1% of all households were made up of individuals and 17% had someone living alone who was 65 years of age or older. The average household size was 2.18 and the average family size was 2.69. 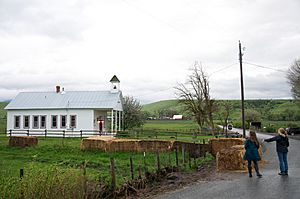 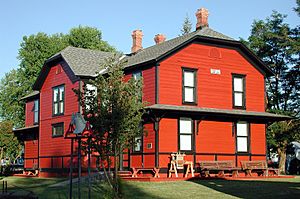 Architectural features in Prairie City include historic stone buildings and the former railway depot. The ground floor of the depot consists of a waiting room, railway station agent's office, baggage room, and freight office. The second floor, once the home of the station agent and his family, houses the Dewitt Museum, with pioneer artifacts, tools, furniture, and memorabilia, as well as rocks and minerals from the surrounding area. The depot was listed on the National Register of Historic Places in 1976.

Bates State Park, built on the site of a former lumber mill, is northeast of Prairie City at Bates, near Austin Junction at the intersection of U.S. Route 26 and Oregon Route 7.

All content from Kiddle encyclopedia articles (including the article images and facts) can be freely used under Attribution-ShareAlike license, unless stated otherwise. Cite this article:
Prairie City, Oregon Facts for Kids. Kiddle Encyclopedia.