Princess Charlotte of Cambridge (Charlotte Elizabeth Diana; born 2 May 2015) is a member of the British royal family. She is the second child and only daughter of Prince William, Duke of Cambridge, and Catherine, Duchess of Cambridge. She is fourth in the line of succession to the British throne. 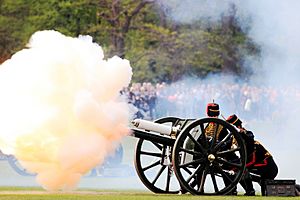 The Gun Salute in Hyde Park, London to mark the birth of Charlotte

Charlotte, the second child of Prince William, Duke of Cambridge, and Catherine, Duchess of Cambridge, was born at 08:34 BST on 2 May 2015 in Lindo Wing of St Mary's Hospital, London. Several landmarks were illuminated pink to mark the birth, including: Tower Bridge, the London Eye, and the Trafalgar Square fountains, on 3 May, followed by gun salutes at Hyde Park and the Tower of London on 4 May. Later that day, her name was announced as Charlotte Elizabeth Diana, with her two middle names being chosen in honour of her great-grandmother Queen Elizabeth II and paternal grandmother Diana, Princess of Wales.

On 5 July 2015, Princess Charlotte was baptised by the Archbishop of Canterbury at St. Mary Magdalene Church, Sandringham. Her godparents are her parents' cousins The Honorable Laura Pettman and Adam Middleton, and family friends Thomas van Straubenzee, James Meade, and Sophie Carter. The ceremony used a font that was made for Queen Victoria's first child. 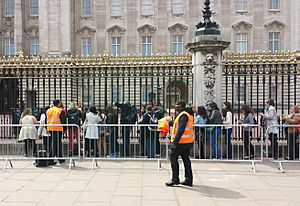 Despite the efforts of her parents to shelter their children from the press, each photograph or public appearance of Charlotte has caused a media frenzy. According to shopping statistics and polls among parents, Charlotte is a major children's style icon. Retailers, particularly in clothing, benefit greatly from their products appearing in photographs of the Princess. Brand Finance have estimated that she will be worth more than £3,000,000,000 to the British economy throughout her lifetime. In July 2018, Reader's Digest valued her at $5,000,000,000 or £3,800,000,000. On 11 June 2016, she made her first public appearance, which was on the balcony of Buckingham Palace during Trooping the Colour. She accompanied her parents on their royal tour of Canada in September 2016 and on their diplomatic visit to Poland and Germany in July 2017.

Charlotte started her education at the Willcocks Nursery School, near her family's home in Kensington Palace, in January 2018.

Charlotte is, from birth, a princess of the United Kingdom entitled to the style of Royal Highness under letters patent issued by Queen Elizabeth II on 31 December 2012, which gave the title and style to all children of the Prince of Wales's eldest son. She is thus styled "Her Royal Highness Princess Charlotte of Cambridge".

All content from Kiddle encyclopedia articles (including the article images and facts) can be freely used under Attribution-ShareAlike license, unless stated otherwise. Cite this article:
Princess Charlotte of Cambridge Facts for Kids. Kiddle Encyclopedia.