Province of Caserta facts for kids

The Province of Caserta (Italian: Provincia di Caserta) is a province in the Campania region of Italy. Its capital is the city of Caserta, situated about 36 kilometres (22 mi) by road north of Naples. The province has an area of 2,651.35 square kilometres (1,023.69 sq mi), and a total population of 924,414 as of 2016. The Palace of Caserta is located near to the city, a former royal residence which was constructed for the Bourbon kings of Naples. It was the largest palace and one of the largest buildings erected in Europe during the 18th century. In 1997, the palace was designated a UNESCO World Heritage Site. 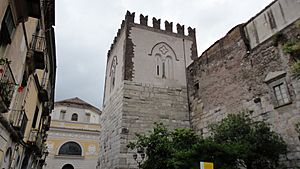 The province of Caserta in the historical Terra di Lavoro region, also known as Liburia, covered the greatest expanse of territory around the 13th century when it extended from the Tyrrhenian Sea and the islands of Ponza and Ventotene to the Apennines and the southern end of the Roveto Valley. In the Kingdom of Naples and the Kingdom of the Two Sicilies, Caserta was one of the most important departments in southern Italy.

The first capital of the region was the ancient city of Capua until 1818, then Caserta. In addition to Naples, the most important centers were Caserta, Capua, Nola, Gaeta, Sora, Aversa, Teano, and Isola Liri. In 1816, during the French occupation, Joseph Bonaparte reformed the territorial division of the kingdom of Naples, on the basis of the French model. A series of royal decrees completed the reforms, introducing local administrative units or communes like the French ones. The new Napoleonic reforms led to the establishment of the Province of Naples. In 1863, after the annexation of the Kingdom of Italy, the north-eastern comuni of Terra di Lavoro became part of the province of Campobasso, and Venafro and the surrounding areas were later transferred to the province of Isernia, established in the 1870s. In 1927, Benito Mussolini decided to dissolve the province of Terra di Lavoro, uniting much of its territory and the Pontine Islands to the province of Naples, although municipalities near Piedimonte and Alife were distributed between the provinces of Benevento and Campobasso and the districts of Sora and Gaeta went to the province of Rome. In 1945, a Decree signed by Umberto di Savoia reconstituted the Province of Caserta, and finally in 1970, the modern province came into being.

The territory of the Province of Caserta, which lies on the southwestern part of central Italy, is bordered to the north by the Matese mountains belonging to the Apennines and by undulating hills, and to the south and west by plains of various types. To the northeast, near the Matese mountains is the Lago del Matese. The highest point is Monte Miletto at 2,050 m (6,730 ft), divided between Campania and Molise. The karst massif is rich in water and minerals, and contains many caves and mountain lakes. Other mountainous areas of note include Monte Santa Croce, with the extinct volcano of Roccamonfina, on the border with Lazio, the Trebulani Mountains, in the central part of the province to the north including Monte Maggiore reaching 1,036 m (3,399 ft), and the Tifatini Mountains to the south. The Volturno River flows through the centre of the province with a defensive outpost at Capua. The southern highlands of Caserta border the Province of Benevento.

All content from Kiddle encyclopedia articles (including the article images and facts) can be freely used under Attribution-ShareAlike license, unless stated otherwise. Cite this article:
Province of Caserta Facts for Kids. Kiddle Encyclopedia.