The provinces (Spanish: provincias) are administrative parts of Costa Rica as in other countries.

The Constitution of Costa Rica says, in its Article 168, "For Public Administration purposes, the national territory is divided into provinces, these into cantons and cantons into districts."

The Law No. 36 of 7 December 1848 divided the country, for the first time, in provinces, cantons and districts, and created 6 provinces: 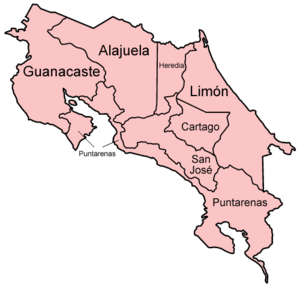 The seven provinces of Costa Rica

All content from Kiddle encyclopedia articles (including the article images and facts) can be freely used under Attribution-ShareAlike license, unless stated otherwise. Cite this article:
Provinces of Costa Rica Facts for Kids. Kiddle Encyclopedia.