Alajuela is a province of Costa Rica. It is in the north-central part of the country, bordering Nicaragua. The provincial capital is the city of Alajuela.

The Alajuela province borders the provinces of Heredia to the east, San José to the south, Puntarenas to the southwest and Guanacaste to the west. Nicaragua is to the north of the province.

The province is in the western part of the Central Valley and is crossed by the Cordillera Central ("Central mountain range) and the volcanic Cordillera de Guanacaste ("Guanacaste mountain range). In the northern part, along the border with Nicaragua, are the plains of the San Carlos and Frío rivers. 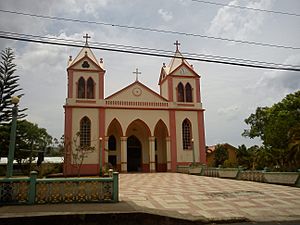 The people of the province are known as Alajuelenses, both men and women.

Evolution of the population in Alajuela

The Alajuela province is divided in 15 cantons, which are divided into 113 Districts.

The main economic activity in the province is farming. In the southern part of the province, tropical ornamentals, coffee, tubers, and Leaf vegetables are the major crops. Toward the north and northeast, rice, corn, pineapple, bananas, and sugarcane are important crops.

There is also an important cattle raising industry in the province, mainly in the San Carlos canton.

Alajuela has attracted many export-orientated manufacturing companies, especially within the free trade zones around the municipality of Alajuela.

All content from Kiddle encyclopedia articles (including the article images and facts) can be freely used under Attribution-ShareAlike license, unless stated otherwise. Cite this article:
Alajuela Province Facts for Kids. Kiddle Encyclopedia.