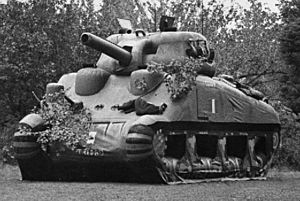 A dummy Sherman tank, used to deceive the Germans.

The term psychological warfare is used to describe methods that military use in war-time. We may understand it as an attempt to influence the behavior/beliefs of enemy armed forces and/or foreign civilian populations. Psychological warfare has many similarities with propaganda messages. 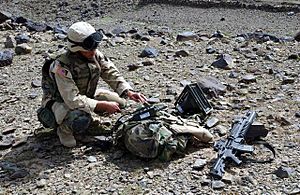 US Army PSYOP specialist sets up a loudspeaker system to broadcast messages to the local people of Narizah, Afghanistan

The term "pychological warfare" has always been considered problematic and offensive. The use of military power is increasingly not any more on the level of an local armored conflict, but on the global basis using mass media. The NATO uses the term "psychological operation" (PSYOP).

People are trying not to use the term "psychological warfare". They would rather use terms like "stabilisation" or "satisfaction".

Psychological warfare has mostly been introduced in the second world war. Both Axis Powers and Allied used it.

All content from Kiddle encyclopedia articles (including the article images and facts) can be freely used under Attribution-ShareAlike license, unless stated otherwise. Cite this article:
Psychological warfare Facts for Kids. Kiddle Encyclopedia.