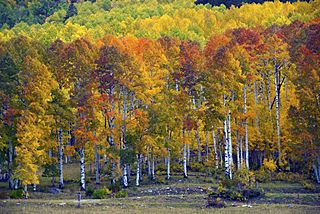 Purgatory Resort is a family-oriented ski resort located in the San Juan Mountains of Southwest Colorado, 26 miles (42 km) north of the town of Durango. It was originally opened by Ray Duncan in 1965 and offers 85 trails, including 2 terrain parks, the Paradise Freestyle Arena, Pitchfork Terrain Garden, and a Burton Riglet Park for young snowboarders. The resort covers 1,360 skiable acres, with 88 trails and 10 ski lifts, including one six-person "Flying Couch" or "Six pack" and one high speed quad lift. Average annual snowfall is 260 inches per year, and artificial snow is produced on approximately one-fifth of the mountain. The elevation at the summit is 10,822 feet (3,299 m), with a vertical drop of 2,029 feet (618 m).

In spring 2015, Durango Mountain Resort was renamed back to Purgatory when James Coleman, who had grown up skiing in the area, bought the resort. The name change, popular with the local population, was one of several changes and improvements Coleman made soon after purchasing the ski area. During the 2015-2016 ski season, a new high-speed ski lift, Legends Lift, replaced an older lift on the backside of the mountain, cutting lift time from 15 minutes to 5 minutes.

Facilities at the resort include condos that are rented out by their owners to vacationing tourists, a nightclub/bar at the bottom of the ski slopes by the chair lifts, a shuttle that goes back and forth from the resort to the nearby town of Durango, and a ski school with "bunny slopes". One of the more unusual features of the resort is an urgent care clinic, staffed by mid-level health care providers from the nearby town of Durango, Colorado. The on-site urgent care clinic is available anytime the slopes are open, and treats mostly ski related injuries. The Purgatory ski patrol takes injured skiers off the mountain directly to the clinic, expediting treatment and eliminating the need for patients to wait for an ambulance to respond from nearby Durango, Colorado.

The name Purgatory comes from Purgatory Creek which runs through the area and Purgatory Flats, today the location of the base of the ski area. The exact origin of the name itself is unclear. Some believe it originated from a 1776 Spanish expedition led by Silvestre Vélez de Escalante. Several Spanish explorers traveling on a nearby river were lost. Their bodies were never found and the other explorers believed that the souls of the lost men would be relegated to Purgatory. Another theory states that when miners were trying to get from Durango to the prosperous mines in the Silverton area they had to pay $.50 to use the toll road. Miners who couldn't afford the toll were stuck in the area which became known as Purgatory Flats because they were stuck in a position of Limbo. They couldn't afford to get up the mountain, but couldn't see themselves quitting and going down when so close.

All content from Kiddle encyclopedia articles (including the article images and facts) can be freely used under Attribution-ShareAlike license, unless stated otherwise. Cite this article:
Purgatory Resort Facts for Kids. Kiddle Encyclopedia.