Raccoon Creek is a tributary of Tomhicken Creek in Luzerne County and Schuylkill County, in Pennsylvania, in the United States. It is approximately 3.3 miles (5.3 km) long and flows through Black Creek Township in Luzerne County and North Union Township in Schuylkill County. The watershed of the stream has an area of 2.67 square miles (6.9 km2). The stream is considered to be a High-Quality Coldwater Fishery and Class A Wild Trout Waters. The main rock formations in the stream's watershed are the Mauch Chunk Formation and the Pottsville Formation and the main soil is the Leck Kill soil. 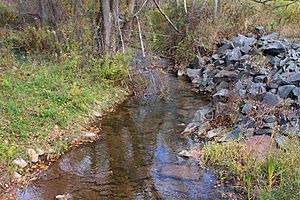 The headwaters of Raccoon Creek are between Little Sugarloaf Mountain and South Buck Mountain.

Raccoon Creek is a small stream, with a width of 2.2 metres (7.2 ft). It has a moderate gradient of 19.9 meters per kilometer. The creek has been known to overflow its banks and flood nearby homes.

The watershed of Raccoon Creek has an area of 2.67 square miles (6.9 km2). The watershed is mostly in Black Creek Township, Luzerne County, but a substantial portion is in North Union Township, Schuylkill County. Most of the lower reaches of the stream (in Schuylkill County) are in agricultural land. Additionally, there are two areas of developed land in the upper reaches of the watershed: the communities of Nuremberg and Weston.

Raccoon Creek is in the United States Geological Survey quadrangle of Nuremberg.

In 2011, the Department of Community and Economic Development gave Black Creek Township, Luzerne County a $10,000 grant to do a study of Raccoon Creek. The purpose of the study was to reduce the effect that the creek's flooding had on nearby residential areas and also to stabilize the stream's banks.

The North Union Township Park is in the vicinity of Raccoon Creek.

A 1997 report stated that Raccoon Creek was an excellent site for angling.

All content from Kiddle encyclopedia articles (including the article images and facts) can be freely used under Attribution-ShareAlike license, unless stated otherwise. Cite this article:
Raccoon Creek (Tomhicken Creek tributary) Facts for Kids. Kiddle Encyclopedia.