Rainbow was a British children's television series, created by Pamela Lonsdale, which ran from 12 November 1972 until 31 December 1992 when Thames Television lost its ITV franchise to Carlton Television. The series was revived by HTV in 1994 until 24 March 1997, in two different formats from the original Thames series, with differing cast members.

The series was originally conceived as a British equivalent of long-running American educational puppet series Sesame Street. The British series was developed in house by Thames Television, and had no input from the Children's Television Workshop. It was intended to develop language and social skills for pre-school children, and went on to win the Society of Film and Television Arts Award for Best Children's Programme in 1975. It aired five times weekly, twice weekly on Mondays and Wednesdays then Tuesdays and Fridays, and finally once weekly at 12:10 on Fridays on the ITV network.

The show had three producers over its lifetime – Pamela Lonsdale, Charles Warren and Joe Boyer.

The original Thames series has gained cult status and continues to get frequent mentions on radio and television. A few DVDs have been produced, including one celebrating 30 Years of Rainbow.

Each episode of Rainbow revolved around a particular activity or situation that arose in the Rainbow House, where the main characters lived. Some episodes, particularly in the early years, were purely educational in format and consisted of a series of scenes involving the characters learning about that particular episode's subject, interspersed with real-world footage, songs, stories and animations related to that same subject. The puppet characters of Zippy, George and Bungle would take the role of inquisitive children asking about the episode's subject, with the presenter (initially David Cook, and from 1974 onwards Geoffrey Hayes) serving the role of teacher figure, educating them about the subject. From the 1980s onwards, most episodes were more story-driven and frequently involved some kind of squabble or dispute between the puppet characters of Zippy, George and Bungle, and Geoffrey's attempts to calm them down and keep the peace.

The main story was interspersed with songs (most notably from Rod, Jane and Freddy, although the singers on the show changed several times during its run), animations, and stories read from the Rainbow storybook, usually by Geoffrey (or David, depending on the episode's air date). Some episodes focused on a particular topic, such as sounds or opposites, and consisted mainly of short sketches or exchanges between the main characters, rather than a consistent storyline. Brief sequences of animated line drawings, made by Cosgrove Hall Productions, were included in many episodes.

The theme song for the show was actually a small part of the full version, also called "Rainbow" and written by Hugh Portnow, Lady Hornsbrie, Hugh Fraser and Tim Thomas of the band Telltale, who regularly appeared in the first three seasons of the show. It was released by Music for Pleasure in 1973 with the B-side "Windy Day". Although Telltale left the show in 1974, their recording of the theme tune continued to be used until the end of the original show's run in 1992.

There have been several dance versions of the theme tune which have been released as singles. The dance act Solo had a minor hit in 1991 with a sample-free instrumental version of the Rainbow theme, while Eurobop released a dance version in 1993 featuring samples taken directly from the original theme as well as voice samples of the main characters, who appeared on several music TV shows to promote the single; a hardcore version entitled "Rainbow Vibes" by the Sonz of Bungle circulated on 12" vinyl in 1992 which sampled the theme tune over a chopped up breakbeat and featuring rave stabs. The most recent dance version, titled "It's a Rainbow!" and featuring the vocals of Zippy and George, reached the UK top 20 in 2002. 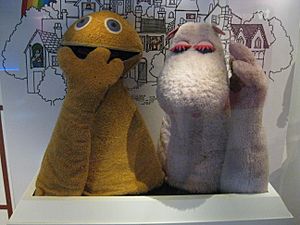 Zippy and George at the National Media Museum

Rainbow featured the following characters, each with their own character style:

Generally speaking, George and Zippy represented two 'types' of child, George being the quiet and shy type, while Zippy represented the hyperactive and destructive type. Zippy often demonstrated a cynicism and wit that went beyond the "4th wall" and appealed to older viewers. George was usually vindicated, and Zippy got his comeuppance. While they were apparently young 'children' (aged around 6), Bungle was an older 'child' (aged around 8), and differed from them in being a costume rather than a hand puppet. Geoffrey's relationship to them was unclear, other than being a kind of mentor/teacher/carer.

Episodes of the original Rainbow, dating from the early 1980s, were shown sporadically on the UK satellite TV channel Nick Jr. (and/or its sister channel, Nick Jr. 2) in the late 2000s as part of its Nick Jr. Classics reruns. A previous repeat run took place on UK Gold (now Gold) from its launch in November 1992 to 1994; these were mostly from the last three years of the programme (without Rod, Jane and Freddy).

All content from Kiddle encyclopedia articles (including the article images and facts) can be freely used under Attribution-ShareAlike license, unless stated otherwise. Cite this article:
Rainbow (TV series) Facts for Kids. Kiddle Encyclopedia.