Red Hill (postcode: 2603) is a suburb of Canberra, Australian Capital Territory, Australia. The suburb is named after the northernmost hill of the ridge to the west of the suburb. The ridge is a reserve and managed as part of the Canberra Nature Park. The hill is an element of the central Canberra design axis.

The hill was once part of the Narrabundah lease held by Charles Russell. He grazed sheep but as the suburb became built up, local pet dogs worried them and killed them. He changed to cattle and finally gave up the lease in 1992.

The Red Hill Precinct or "Old Red Hill" is bounded by Mugga Way, Moresby Street, Arthur Circle, Monaro Crescent and Flinders Way. The major streets of this area were included in an outline plan for the early development of Canberra prepared by Walter Burley Griffin in 1918. Its streetscape and landscape character reflect 1920s garden city planning. It is listed by the ACT Heritage Council.

Residential land in the suburb of Red Hill was offered for sale in the first Canberra land auction conducted on 12 December 1924. By 1929, 22 houses had been built and by 1955 there were 64 houses.

Other sites in Red Hill listed by the ACT Heritage Council are: 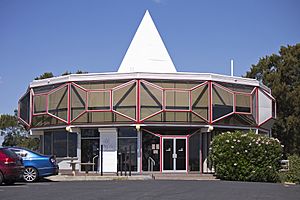 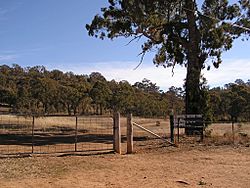 Red Hill's most important recreational area is the hill itself. From the Canberra Times Letters to the Editor in May 2000 one resident said:

"Most Sundays I walk on the slopes of Red Hill in bush that is not pristine, not especially beautiful, but that is there close to where I live, a bit of bush rather than town earth and rock, not bitumen. There is a variety of birds, a miscellany of trees, some of them exotics, a range of weedy but pretty flowers, no doubt snakes, and certainly kangaroos. Ironically, a month ago I saw more kangaroos (a mob of 14) on Red Hill in the centre of Canberra than I saw subsequently during the entirety of a 16-day tour of the Red Centre. This Red Hill bush it can't be called wilderness makes Canberra a better place to live for the many people who do walk there and enjoy its qualities. "

Red Hill has a local public primary school and a government pre school located in the same building complex. The Red Hill School is an accredited IB World School. There is also a Catholic primary school, St Bede's Primary School, and the Canberra Grammar School, an Anglican school for boys and girls, and a French-Australian preschool.

Red Hill residents get preference for:

Calthorpes' House at 24 Mugga Way was built in 1927 by Harry Calthorpe, stock and station agent with the firm Woodgers & Calthorpe. Designed by the architectural firm of Oakley and Parkes, the house displays many characteristics of the Spanish Mission style. The family (Harry, his wife Del and two daughters, Del and Dawn) lived together in the house throughout the Depression and Second World War, when both girls married. After Harry's death in 1950, his wife continued to live in the house, mostly alone. While friends and neighbours redecorated their houses, she elder never did. After her death in 1979, it was recognised that an opportunity existed to preserve a house that related to Canberra's early years in staggering completeness, and the Australian Commonwealth Government bought the house, its garden and the house's contents from the two daughters in 1984.

The Australian Institute of Architects in its register of significant 20th-century architecture says the building is a rare, relatively unchanged example of a 1920s Australian home. Noting that it encapsulates family life of the time, it also points to the interior design and clinical appearance of the kitchen and bathroom, which "heralded the new social era".

A suburban garden named Boxford designed by Polly Park was divided into six separate sections, each reflecting the garden history and culture of a different part of the world. One of the gardens is in the Japanese style; another features a fountain inspired by chapel of Oscar Niemeyer in garden derived from the ideas of Burle Marx a Brazilian garden designer. The garden has been listed on the ACT Heritage Register, and it was featured in Burke's Backyard.

Despite its heritage listing the garden was destroyed by new owners.

The main access to the suburb from the south is from Hindmarsh Drive onto either Mugga Way or Dalrymple Street. The main roads through the suburb are La Perouse Street, Flinders Way and Monaro Crescent. The suburb's roads are named after ships and explorers.

The mean household size was 2.7 persons.

Red Hill is located within the federal electorate of Canberra, which is currently represented by Alicia Payne in the House of Representatives. In the ACT Legislative Assembly, Red Hill is part of the electorate of Kurrajong, which elects five members on the basis of proportional representation, currently two Labor, two Liberal and one Greens. Polling place statistics are shown to the right for the Red Hill polling place at Red Hill School in the 2019 federal and 2016 ACT elections. 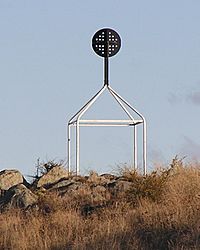 The Red Hill ridge forms the south-west boundary of the suburb. The ridge separates the central Canberra valley from Woden Valley. The northernmost peak is Red Hill, the Davidson Trig is on the middle point, and Mount Mugga is on the southernmost point of the ridge across Hindmarsh Drive.

The Red Hill ridge is said by geologists to be an "erosion residual" resulting from metamorphisis of sedimentary rock. The Yarralumla Formation sediments were toughened by thermal metamorphism from a small granite intrusion to the south thereby providing the resistant core of the ridge. The granite is deeply weathered and does not outcrop but is evident by the smooth slopes and deep red soils on the lower slopes to the north-west by the road to the Federal Golf Course. This intrusion is known as Federal Golf Course Tonalite. It is dated at 417±8 Mya. It is completely crystalline with mineral content of plagioclase, hornblende, biotite and interstitial quartz and no potash feldspar.

The type of red soil is known as terra rossa.

Mount Painter Volcanics dark grey to green grey dacitic tuff is found in all except the west. This includes most of the built up area. Yarralumla formation outcrops on Red Hill down to Mugga Way. The Federal Golf Course hanging off the west side of Red Hill also counts as part of the suburb. It has a Silurian tonalite intrusion under the whole course referred to as granite above.

All content from Kiddle encyclopedia articles (including the article images and facts) can be freely used under Attribution-ShareAlike license, unless stated otherwise. Cite this article:
Red Hill, Australian Capital Territory Facts for Kids. Kiddle Encyclopedia.