Regicides Trail is a Blue-Blazed hiking trail, about 7 miles (11 km) long, roughly following the edge of a diabase, or traprock, cliff northwest of New Haven, Connecticut. It is named for two regicides, Edward Whalley and his son-in-law William Goffe, who signed the death warrant of King Charles I of England. Upon the restoration of Charles II to the throne and the persecution of the regicides, the pair hid in Judges Cave near the south end of the trail in 1660. The Regicides is widely known to be one of the most technical trails within the CT Blue-Blazed trail system. 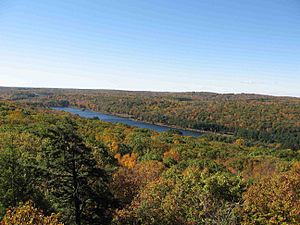 Lake Watrous in Woodbridge and Bethany, Connecticut is visible from an overlook on the Regicides Trail, about one mile south of its northern junction with the Quinnipiac Trail.

The trail is a narrow footpath marked with blue blazes, sometimes rocky with difficult footing. It is roughly paralleled by Baldwin Drive, a paved road currently closed to motor vehicles, except for maintenance vehicles, named for New Haven native Simeon E. Baldwin, governor of Connecticut from 1911 to 1915. The trail is within the towns of New Haven, Hamden, Woodbridge, and Bethany, and entirely within West Rock Ridge State Park, but is maintained by a private organization, the Connecticut Forest and Park Association, in conjunction with the West Rock Ridge Park Association. At its southern end, the Regicides Trail terminates behind a pavilion at the park's South Overlook, which has a panoramic view of South Central, Conn., including Sleeping Giant State Park, East Rock Park, New Haven Harbor, and the Long Island Sound. At its northern end, the Regicides Trail connects with the Quinnipiac Trail. Both trails are part of the state's system of "Blue-Blazed Trails" totaling more than 800 miles (1,300 km).

All content from Kiddle encyclopedia articles (including the article images and facts) can be freely used under Attribution-ShareAlike license, unless stated otherwise. Cite this article:
Regicides Trail Facts for Kids. Kiddle Encyclopedia.