Kids Encyclopedia Facts
This article is about the concept of supernatural revelation. For the book in the Bible, see Book of Revelation. 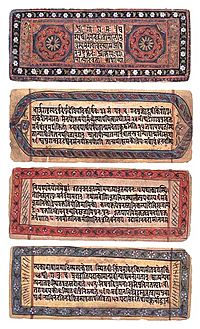 The Bhagavad Gita is said to be Krishna's counsel to Arjuna.

Revelation is when something is made clear or obvious that was hidden before. Most of the time, the term is used to speak about religious revelations. That means that the revelation is done by communication with the divine. Revelation can be through a deity who may send a messenger. Messengers that are supernatural are often called angels (Angel literally means messenger). Human messengers tend to be called prophets.

All content from Kiddle encyclopedia articles (including the article images and facts) can be freely used under Attribution-ShareAlike license, unless stated otherwise. Cite this article:
Revelation Facts for Kids. Kiddle Encyclopedia.