Reynolds is a town in Taylor County, Georgia, United States. The population was 1,086 at the 2010 census.

There were 447 households, out of which 23.0% had children under the age of 18 living with them, 41.4% were married couples living together, 19.7% had a female householder with no husband present, and 35.3% were non-families. 32.7% of all households were made up of individuals, and 14.3% had someone living alone who was 65 years of age or older. The average household size was 2.32 and the average family size was 2.95. 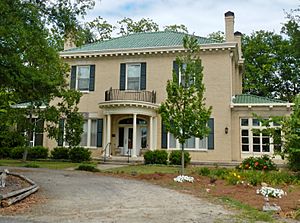 The Ferdinand Augustus Ricks House was built c. 1905 and was listed on the National Register of Historic Places on June 17, 1982.

The town was said to have been settled first by Dr. Alfred Coleman. In 1853 it became the town of Reynolds, although the origin of its name is unknown. The Coleman Institute Catalog said that it was named for John Reynolds, one of Georgia's famous governors, while another source said it was named for the superintendent of the railroad at the time.

Earl Little Sr., the father of Malcolm X, was born in Reynolds on July 29, 1890. As recounted in Malcolm X's autobiography, he had left school there after the third or fourth grade, and had left his hometown after some violent event where he lost en eye, and of which he never told his son the details.

Former Lieutenant Governor of Georgia Garland T. Byrd was also a Reynolds native and is interred there at Hillcrest Cemetery.

The first bank in Reynolds was organized in 1897.

The first citizen of Reynolds is said to be Henry Hodges. He and his brother, Wash Hodges, came into the area ahead of the railroad and owned land along the Flint River.

The earliest recorded minutes of the City of Reynolds found in the City Hall are dated January 10, 1913.

All content from Kiddle encyclopedia articles (including the article images and facts) can be freely used under Attribution-ShareAlike license, unless stated otherwise. Cite this article:
Reynolds, Georgia Facts for Kids. Kiddle Encyclopedia.