Kids Encyclopedia Facts
This page is about the city. For the townships, see Richmond Township, Michigan (disambiguation).

Richmond is a city on the border between Macomb and St. Clair counties within Metro Detroit and the U.S. state of Michigan. The population was 5,735 at the 2010 census. Most of the city is located in Macomb County, though there is a small portion in St. Clair County. The city is adjacent to Richmond Township and Lenox Township in Macomb County, although it is administratively autonomous. It is also adjacent to St. Clair County's Columbus Township and Casco Township.

There were 1,977 households out of which 31.9% had children under the age of 18 living with them, 53.1% were married couples living together, 10.1% had a female householder with no husband present, and 32.6% were non-families. 27.8% of all households were made up of sole individuals and 11.0% had someone living alone who was 65 years of age or older. The average household size was 2.45 and the average family size was 2.99.

In 1835, Erastus Beebe set out with two brothers and several other people to create a new city out of a wilderness area in Michigan. He founded Beebe's Corners, which in 1878 agreed to join with the two nearest neighboring communities of Ridgeway and Cooper Town to form the Village of Richmond. In 1879, the Michigan Legislature officially created the village charter. In 1989, the city annexed the Muttonville area of Lenox Township, parts of Richmond Township in Macomb County, and part of Casco and Columbus Townships in St. Clair County. 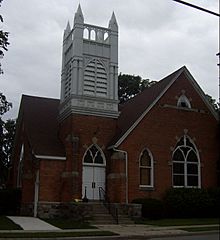 The city has a local library and a local community theatre (Richmond Community Theatre).

The city is a starting point for the Macomb Orchard Trail, which is a 23.5-mile (37.8 km) multi-use, non-motorized trail currently being developed on an abandoned railroad right-of-way in Northern Macomb County. The new trail also connects with the Stony Creek Metropark, Bloomer Park, and the Paint Creek Trail.

The local paper was the Richmond Review, which was bought out by The Voice.

The First Congregational Church, home of the Richmond Community Theatre, is listed on the National Register of Historic Places, and the State of Michigan placed a historical marker in front of the Harold and Mabelle Weller House. Kathryn Bishop Eckert's Buildings of Michigan lists St. Augustine Church as an architecturally important building due to its twin steeples, Italian gothic elements, and fieldstone facade.

The Richmond Area Historical and Genealogical Society owns and maintains three historic buildings and one replica building in Bailey Historic Park. The buildings include: 1) a one-room schoolhouse built in 1885 and originally located on School Section Road in Richmond Township; 2) a Grand Trunk Railroad Depot built in the early 1900s and originally located in Hickey, which was in Columbus Township, MI, and 3) the Donley Family Log Cabin and Outhouse, which were built in 1850 and originally located on 29 Mile Road in Lenox Township. The newest building is a replica of a Blacksmith Shop that serves as the Society's museum and office. Grand opening of the blacksmith shop was held in 2009. Check the society's website for current museum display information.

All content from Kiddle encyclopedia articles (including the article images and facts) can be freely used under Attribution-ShareAlike license, unless stated otherwise. Cite this article:
Richmond, Michigan Facts for Kids. Kiddle Encyclopedia.