River Bend Farm is a historic farm located in East Coventry Township, Chester County, Pennsylvania in a bend of the Schuylkill River near Pottstown. The farm house is a good example of early Chester County construction techniques, being built with stuccoed stone walls and pegged rafters. The farm was owned, but not lived in, by Michael Hillegas, the first Treasurer of the United States. It was also owned by members of the Joshua family political dynasty.

The farm was added to the National Register of Historic Places in 1980.

Henry Casdorp's family bought 600 acres on "Turkey Point," including the current farm site, on November 28, 1763 from Pennsylvania's proprietors, Thomas and Richard Penn for £60. They sold the land for £2,400 to Michael Hillegas and Francis Winey on May 23, 1764. The property sold included a house, which was likely a log cabin built before the Casdorp purchase. The new owners, in turn, sold 300 acres sixteen months later to Daniel Hiester who bought the property for his son John. 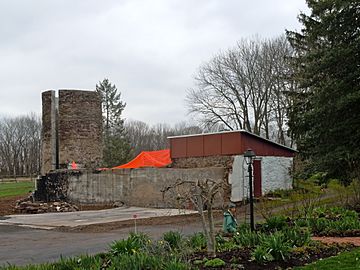 Site of the recently burned down barn, 2011. 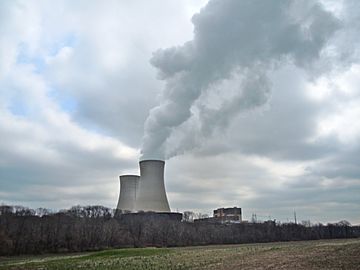 Another National Register of Historic Places listed site, Fricks Locks Historic District, lies about 600 yards south of the house. Starting in 1974, the Limerick Nuclear Power Plant was constructed to the east of the house, directly across the Schuylkill River.

All content from Kiddle encyclopedia articles (including the article images and facts) can be freely used under Attribution-ShareAlike license, unless stated otherwise. Cite this article:
River Bend Farm Facts for Kids. Kiddle Encyclopedia.