Kids Encyclopedia Facts
Not to be confused with Ogden River. 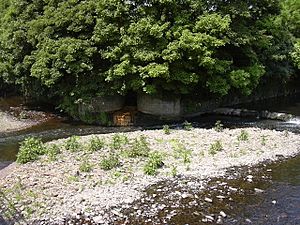 The confluence of the Rivers Ogden and Irwell at Irwell Vale

Beginning on the moors of Haslingden Grane as Ogden Brook, it heads east, feeding Ogden and Calf Hey Reservoirs. It then passes through the Holden Wood Reservoir and collects Swinnel Brook in an area historically known as the Trippet of Ogden, becoming the River Ogden. Turning to the south, it passes through the Helmshore part of Haslingden where it is met by Musbury Brook and then Alden Brook, overlooked by Musbury Tor. Heading southeast it joins the River Irwell at Irwell Vale, between Rawtenstall and Ramsbottom near .

All content from Kiddle encyclopedia articles (including the article images and facts) can be freely used under Attribution-ShareAlike license, unless stated otherwise. Cite this article:
River Ogden Facts for Kids. Kiddle Encyclopedia.