Robbinston is a town in Washington County, Maine, United States. The population was 574 at the 2010 census.

Robbinston is in Washington County, the easternmost of the United States. As it was settled, the areas, or "Plantations" were numbered, and then became villages and cities. It was named for Edward H. and Nathaniel J. Robbins who received a land grant for the area on October 21, 1786, and became the third and fourth family settled there. A post office was established by 1796, and Robbinston was incorporated on February 18, 1811.

The area near Robbinston was first settled by the French explorer Pierre de Monts from 1604-5 and then abandoned when the colony lost 36 people that first winter. That island, once called De Mont's Island, then the Neutral Island, is now the St. Croix Island International Historic Site. It marks the boundary between the United States and Canada as set out by treaty in 1783. Traces of the fort were first excavated in 1798, then the St. Croix Lighthouse was installed in 1856 at the head of Passamaquoddy Bay where it meets the St. Croix River. It now has seven life-sized historical statues as part of the park walk.

The river is 3 miles (5 km) wide separating Robbinston from the town of St. Andrews, New Brunswick, Canada. Still saltwater, the tidal range is 27.5 feet (8.4 m). Because of the abundance of wood, much of the early industry centered around shipbuilding. For example, in 1856, 17 vessels, ranging from 100 to 1000 tons each, were built at Robbinston. When steam-powered ships arrived, Robbinston returned to fishing and farming potatoes, which escaped the blight found in warmer areas. The granite quarry in Red Beach also was a local industry. The seven lakes and streams in Robbinston boasted pickerel, trout, perch and salmon.

During the mid-19th century, Robbinston was a last stop for the Underground Railroad where escaping slaves would cross over into Canada and freedom. One of the houses that supported them still stands, the John N. Brewer Mansion, now a bed and breakfast. Built in 1785 or 1828 (conflicting evidence), it is on the National Register of Historic Places. Other historical sites in Robbinston are the Grace Episcopal Church, James S. Pike Racing Milestones, Pulpit Rock, Henrietta Brewer House (Redclyffe Shore Motel) and Sewall Memorial Congregational Church, with its roots in 1817.

Up five miles along Coastal Route 1 is Devil's Head, a high rocky bluff overlooking the river and landmark for watercraft. There is a nice trail and picnic site next to the water. The highest lookout point, at 300 feet (91 m) above sea level, is Trimble Mountain, off Brewer Road. The three islands are accessible by boat, which can be rented or hired.

Many people have family historical roots in the area and visit for business as well as pleasure. The Washington County Historical Society is best contacted in advance, since many of the records are held in the larger towns and are more easily navigated with a little direction. 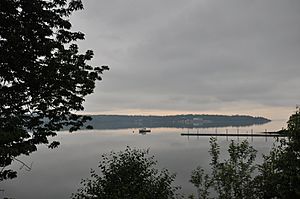 View of the St. Croix River from Robbinston; St. Andrews, New Brunswick lies across the river

There were 238 households, of which 29.8% had children under the age of 18 living with them, 59.2% were married couples living together, 3.4% had a female householder with no husband present, 6.7% had a male householder with no wife present, and 30.7% were non-families. 24.4% of all households were made up of individuals, and 14.7% had someone living alone who was 65 years of age or older. The average household size was 2.41 and the average family size was 2.84.

All content from Kiddle encyclopedia articles (including the article images and facts) can be freely used under Attribution-ShareAlike license, unless stated otherwise. Cite this article:
Robbinston, Maine Facts for Kids. Kiddle Encyclopedia.