Robert Hugh Benson AFSC KC*SG KGCHS (18 November 1871 – 19 October 1914) was an English Anglican priest who in 1903 was received into the Roman Catholic Church in which he was ordained priest in 1904. He was a prolific writer of fiction and wrote the notable dystopian novel Lord of the World (1907). His output encompassed historical, horror and science fiction, contemporary fiction, children's stories, plays, apologetics, devotional works and articles. He continued his writing career at the same time as he progressed through the hierarchy to become a Chamberlain to Pope Pius X in 1911 and gain the title of Monsignor.

Benson was the youngest son of Edward White Benson (Archbishop of Canterbury) and his wife, Mary, and the younger brother of Edward Frederic Benson and Arthur Christopher Benson.

Benson was educated at Eton College and then studied classics and theology at Trinity College, Cambridge, from 1890 to 1893.

In 1895, Benson was ordained a priest in the Church of England by his father, who was the then Archbishop of Canterbury. 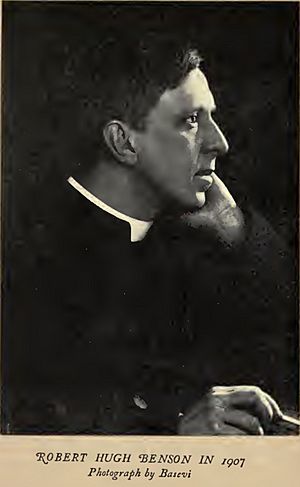 After his father died suddenly in 1896, Benson was sent on a trip to the Middle East to recover his own health. While there he began to question the status of the Church of England and to consider the claims of the Roman Catholic Church. His own piety began to tend toward the High Church tradition, and he started exploring religious life in various Anglican communities, eventually obtaining permission to join the Community of the Resurrection.

Benson made his profession as a member of the community in 1901, at which time he had no thoughts of leaving the Church of England. As he continued his studies and began writing, however, he became more and more uneasy with his own doctrinal position and, on 11 September 1903, he was received into the Catholic Church. Benson was ordained as a Roman Catholic priest in 1904. As the son of the late Archbishop of Canterbury, his conversion and his subsequent ordination, caused a sensation.

His first assignment was as a college chaplain. He had a stutter and is said to have had a 'reedy' voice. Benson was a popular preacher, attracting large audiences wherever he spoke. In 1914, he visited the University of Notre Dame and gave an address on the papacy. Both Confessions of a Convert (1913) and Lourdes (1914) were serialized in Notre Dame's Ave Maria magazine, before appearing as books.

He was awarded the Dignitary of Honour of the Order of the Holy Sepulchre.

Benson continued his writing career along with his ministry as a priest. Like both his brothers, Edward Frederic Benson ("Fred") and Arthur Christopher Benson, Robert wrote many ghost and horror stories, as well as children's stories and historical fiction. His horror and ghost fiction are collected in The Light Invisible (1903) and A Mirror of Shallott (1907). His novel, Lord of the World (1907), is generally regarded as one of the first modern dystopian novels. In the speculative 2007 he predicted there, the Anglican Church and other Protestant denominations had crumbled and disappeared under a rising tide of secularism and atheism, leaving an embattled Catholic Church as the sole champion of Christian truth. Nations are armed with weapons which can destroy a whole city from the air within minutes. In his next novel The Dawn of All (1911), Benson imagines an opposite future 1971 in which the Catholic Church has emerged victorious in England and worldwide after Germany and Austria won the "Emperor War" of 1914; this book is also notable in its fairly accurate prediction of a global network of a passenger air travel. Come Rack! Come Rope! (1912) is a historical novel describing the persecution of English Roman Catholics during the Elizabethan era. The bibliography below reveals a prodigious output.

Benson was appointed a supernumerary private chamberlain to the Pope (Pius X) in 1911 and consequently styled as Monsignor.

As a young man, Benson recalled, he had rejected the idea of marriage as "quite inconceivable". He had a close friendship with "Baron Corvo", alias the novelist Frederick Rolfe, with whom he had hoped to write a book on St Thomas Becket, until Benson decided that he should not be associated with him. Nevertheless he maintained his friendship with Lord Alfred Douglas, the friend and lover of Oscar Wilde, and when an acquaintance protested that the connection with Douglas was inappropriate for him, he replied: "Lord Alfred Douglas is my friend, and he'll come down when he likes!"

Benson died of pneumonia in 1914 in Salford, where he had been preaching a mission. He was 42. At his request, he was buried in the orchard of Hare Street House, his house in the Hertfordshire village of Hare Street. A chapel, dedicated to St Hugh, was built over the site. Benson bequeathed the house to the Catholic Church as a county retreat for the Archbishop of Westminster. The Roman Catholic church in the nearby town of Buntingford, which he helped finance, is dedicated to St Richard of Chichester, but also known as the Benson Memorial Church.

In 2019, the house was put up for sale. Benson's body was exhumed, and moved to the crypt of St. Edmund's College in Old Hall Green.

The Benson Club is a Catholic reading group named in his honour at Fisher House, Cambridge.

All content from Kiddle encyclopedia articles (including the article images and facts) can be freely used under Attribution-ShareAlike license, unless stated otherwise. Cite this article:
Robert Hugh Benson Facts for Kids. Kiddle Encyclopedia.