Rockerville is a small unincorporated community in Pennington County in the Black Hills of the U.S. state of South Dakota. Originally established as a mining camp, it was named for the "rockers" which were used to separate placer gold from stream gravel. 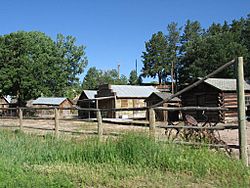 Rockerville was founded in 1876 as the result of a gold rush.

It was a tourist town in the 1950s and 1960s because of its key location on US Highway 16 between Rapid City and Mount Rushmore National Memorial. It had a variety of tourist attractions, including a "Mellerdrammer" (Mellodrama) live theatre, a "Ghosttown" of various buildings with tourist shops and small amusements, "It's a Small World" Museum (featuring an 1880 Tiny Town model and other miniature collections), a motel, campgrounds and RV parks. However, in the conversion of US Highway 16 to four lanes in the mid-1960s, the original townsite was placed literally between the two separate roadways, as there was no way to widen the original highway through the town without completely destroying it. Despite the construction of at least three exits into the town from both directions, the town virtually died because travelers on their way to and from Mount Rushmore never saw the town when whizzing past at 55 miles per hour. Every business closed, and many remain abandoned to this day, although the "Gaslight Saloon" remains a local restaurant and attraction. This severe local economic damage today is sometimes referred to in South Dakota as "Rockerville Syndrome" and has had a significant bearing in construction of new bypasses and highway improvements as recently as 1998 and 2001, in and around such small towns as Hill City and Corson.

Today, several subdivisions and rural residential areas have been built around Rockerville, which also has a sawmill and other commercial activities, leaving the small town rather like a doughnut. It is located close enough to Rapid City, Hill City, and Keystone to serve as a bedroom community, and its natural beauty make it an attractive place to live. A larger commercial area has grown up on US Highway 16 approximately 1 mile east, known as "East Rockerville" or "Rockerville Flats" with various tourist-oriented businesses and more residential areas.

To the west, on the old alignment of US Highway 16, now called Silver Mountain Road, is the rural community of Silver Mountain, including Storm Mountain Center, a United Methodist camping facility. The Flume Trail, a hiking trail following the alignment and remains of a water flume built to provide water for those gold rockers in the 1880s, connects Rockerville, Storm Mountain, and Boulder Hills with Sheridan Lake, deeper in the Hills. Also the west is Beretta Gulch, US Forest Service land well-known to locals as a popular shooting range, and the Keystone Wye, where US 16 and US 16A divide, and famous for what was once the world's largest timber arch bridge.

All content from Kiddle encyclopedia articles (including the article images and facts) can be freely used under Attribution-ShareAlike license, unless stated otherwise. Cite this article:
Rockerville, South Dakota Facts for Kids. Kiddle Encyclopedia.