Rohrbachgraben is a municipality in the Oberaargau administrative district in the canton of Bern in Switzerland.

Rohrbachgraben was a municipality created out of widely scattered settlements and farms around the Rohrbach stream. Until the modern era it was politically part of the village of Rohrbach. During the Middle Ages the entire region was part of a district of the land owned by the Abbey of St. Gall.

Agriculture still dominates the local economy. In 2009 there were still over 40 active farms in the municipality. 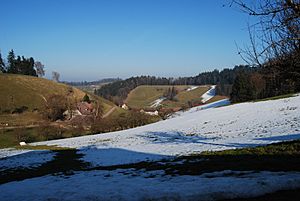 Of the built up area, housing and buildings made up 1.7% and transportation infrastructure made up 1.1%. Out of the forested land, all of the forested land area is covered with heavy forests. Of the agricultural land, 19.4% is used for growing crops and 47.4% is pastures, while 2.3% is used for orchards or vine crops. All the water in the municipality is flowing water.

The municipality is a widely scattered collection of small farms and settlements without a central village. It consists of the hamlets and farm houses of Flückigen, Gansenberg, Glasbach, Kaltenegg, Liemberg, Matten, Wald and Wil.

On 31 December 2009 Amtsbezirk Aarwangen, the municipality's former district, was dissolved. On the following day, 1 January 2010, it joined the newly created Verwaltungskreis Oberaargau.

All content from Kiddle encyclopedia articles (including the article images and facts) can be freely used under Attribution-ShareAlike license, unless stated otherwise. Cite this article:
Rohrbachgraben Facts for Kids. Kiddle Encyclopedia.