Rohrbach is a municipality in the Oberaargau administrative district in the canton of Bern in Switzerland.

Rohrbach was first mentioned in 795 as Roorbah when a local noble, Heribold, gave his lands in Madiswil to the church in Rohrbach. In the 9th century some land around the village was given to the Abbey of St. Gall. The Abbey established an administrator in Rohrbach to manage their lands in the Oberaargau region. Since the Abbey was an Imperial Abbey, the administrator and the landholders on the Abbey's land had immunity from the local count's court and could only be arrested or tried by the Abbey court. At the beginning of the 14th century the bailiwick and the low court of the local Barons of Ruti. Between 1314 and 1370 both offices were held by the Count of Signau and after 1371 by the Count of Grünenberg. The Grünenberg Counts incorporated the village into their personal territory. Hermann of Eptingen then acquired the rule over the village by marriage. He supported the Austrian Habsburgs in the Old Zürich War (1440–46) and lost the village to a Bernese army. After the war, the village was returned to his wife in 1449. In 1504 Bern bought the entire village from Hermann's decedents. In 1505 the village was incorporated into the bailiwick of Wangen. However, Rohrbach retained several special privileges. They were exempt from forced labor for the bailiff and in wars they marched under the banner of the city of Bern. After the 1798 French invasion it was part of the District of Langenthal in the Helvetic Republic and in 1803 it went to the District of Aarwangen.

The village church, St. Martin's Church, was first mentioned in 795. The current building was built in 1738. Originally the church belonged to the Abbey of St. Gall, but in 1345 it was sold to the Knights Hospitaller Thunstetten Commandery. When the Commandery was secularized in 1528 during the Protestant Reformation, its properties, including St. Martin's, went to Bern.

Starting in the 18th century cottage industry weaving began to supplement agriculture as a source of income. In 1889 the Langenthal-Huttwil-Wolhusen railroad opened a station in Rohrbach, which promoted industrialization in the village. As of 2005, over half of all jobs in the village are in manufacturing while many residents commute to Langenthal for work. Around 1980 the new housing development of Riedmatt opened to provide housing for a growing population. 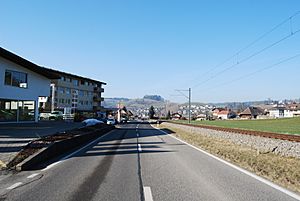 Of the built up area, industrial buildings made up 3.4% of the total area while housing and buildings made up 9.8% and transportation infrastructure made up 1.7%. Out of the forested land, 18.1% of the total land area is heavily forested and 2.0% is covered with orchards or small clusters of trees. Of the agricultural land, 37.2% is used for growing crops and 23.7% is pastures, while 2.0% is used for orchards or vine crops. All the water in the municipality is flowing water.

The municipality is located in the Oberaargau region. It consists of the village of Rohrbach and a number of hamlets including Boden, Brand, Kasern and Sossau as well as scattered farm houses.

On 31 December 2009 Amtsbezirk Aarwangen, the municipality's former district, was dissolved. On the following day, 1 January 2010, it joined the newly created Verwaltungskreis Oberaargau.

All content from Kiddle encyclopedia articles (including the article images and facts) can be freely used under Attribution-ShareAlike license, unless stated otherwise. Cite this article:
Rohrbach, Switzerland Facts for Kids. Kiddle Encyclopedia.