Rolling Green Run is a tributary of the Susquehanna River in Snyder County, Pennsylvania, in the United States. It is approximately 3.3 miles (5.3 km) long and flows through Monroe Township. The watershed of the stream has an area of 2.04 square miles (5.3 km2). The stream is designated as an impaired waterbody due to habitat alteration from golf courses. Its drainage basin is designated as a Warmwater Fishery and a Migratory Fishery. 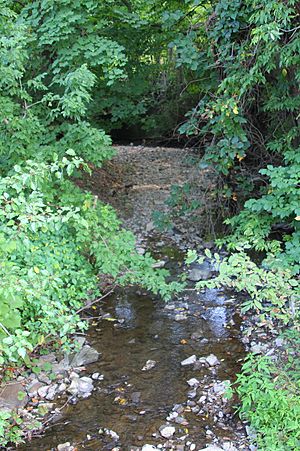 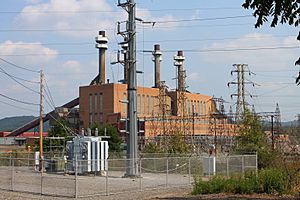 A total of 2.5 miles (4.0 km) of streams in the watershed of Rolling Green Run are designated as impaired. The cause of the impairment is miscellaneous habitat alteration and the probable source is golf courses. Sunbury Generation LP is authorized to discharge bottom ash sluice water and stormwater into the stream until June 30, 2019.

The watershed of 2.04 square miles (5.3 km2). The stream is entirely within the United States Geological Survey quadrangle of Sunbury. The designated use of the stream is aquatic life.

There are relative acute threats of localized flooding on Rolling Green Run.

The drainage basin of Rolling Green Run is designated as a Warmwater Fishery and a Migratory Fishery. The stream is affected by catch and release regulations for bass.

All content from Kiddle encyclopedia articles (including the article images and facts) can be freely used under Attribution-ShareAlike license, unless stated otherwise. Cite this article:
Rolling Green Run Facts for Kids. Kiddle Encyclopedia.